Date: 17th July 2021
Ground: Walmer Road
Location: Lowestoft, Suffolk
My third new ground of 2021 was on Saturday 17th July at Walmer Road in Lowestoft, Suffolk. The game was Kirkley & Pakefield vs. Sheringham in a friendly.
Walmer Road is in the Pakefield suburb in the south of Lowestoft. The complex, which includes an adjoining 3G cage pitch, is nestled in a green space between Pakefield Park and Pakefield Village Green. There is a care home to the north and housing to the south. The venue is two miles south-west of Lowestoft railway station. 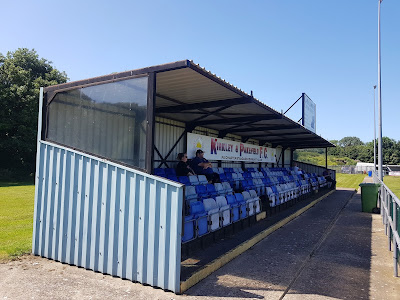 The entrance is in the northern east corner. The set-up on the eastern side of the ground is very pleasant - a nice, new looking club bar opens out onto a patio and large grass area including 15 picnic benches with The Royal Retreat bar towards the edge. On a hot day this was an excellent area which doubled as a good beer garden. Pitchside this side is uncovered standing except for a covered section towards the northern end. The two dugouts are on the eastern side as well. 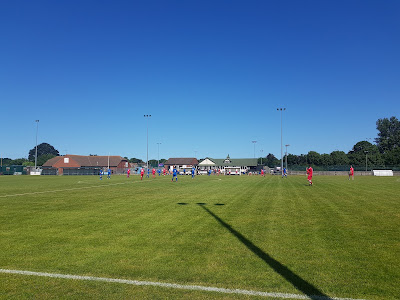 Opposite this is the main stand at the ground - an all-seater stand with room for 145 spectators spread across 4 rows. Either side of this is hard standing with a large grass area behind. The other stand is the Russell Brown Stand directly behind the northern goal. This is a small stand for hard standing with some chairs and benches scattered within. The rest of this side and the whole of the southern end of the field have a strip of concrete standing with large grass areas behind. 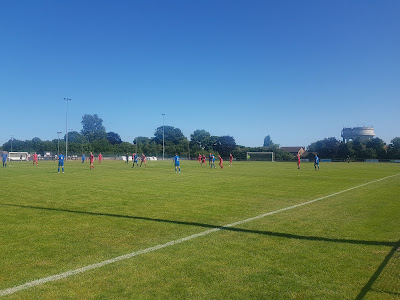 The game was a friendly between Eastern Counties League Premier Division side Kirkley & Pakefield and Eastern Counties League Division One North side Sheringham. The home side took the lead in the 9th minute from the spot after an attacker backed into a defender to win a smart penalty. Miguel Lopez struck low to send the keeper the wrong way. Ten minutes after this an equaliser arrived in unusual circumstances - the home goalie took too long to deal with a backpass, was caught by Kieran Devlin who dispossessed him and then had all the time in the world to roll the ball into the empty net. In the 33rd minute Kirkley restored their advantage - some brilliant skill down the right beat two defenders on the byline before the ball was squared for Connor Swan to knock home from six yards. A couple of minutes after this however the game was stopped after a serious injury to Kieran Underdown. The Kirkley player suffered a broken fibula and dislocated ankle and with all parties waiting for the ambulance after a quarter of an hour the referee agreed with both managers that the game would be abandoned. 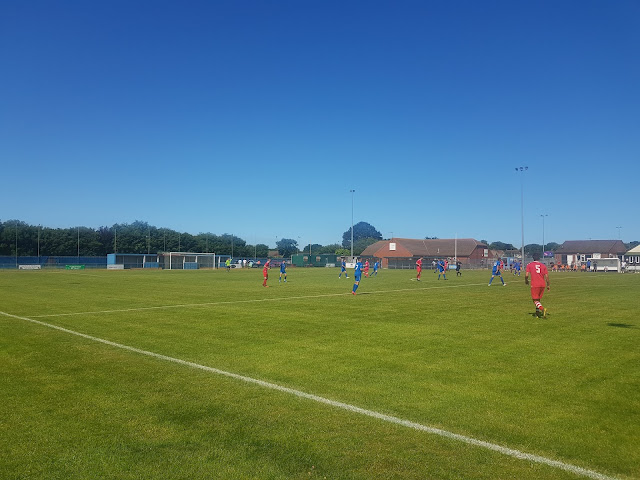