My ninth new ground of 2020 was on Saturday 12th December at Julius Martin Lane in Soham, Cambridgeshire. The game was Soham Town Rangers vs. Royston Town in a friendly.

Julius Martin Lane is located in the west of the town with housing to the north and east, allotments to the south and a park to the west. The nearest railway station is currently 5 miles north at Ely though a new station will be opening in the town in 2022 just half a mile south of the ground. The club was formed in 1947 through a merger between Soham Town and Soham Rangers with it taking over the venue from Soham Rangers who had inhabited it since 1921. 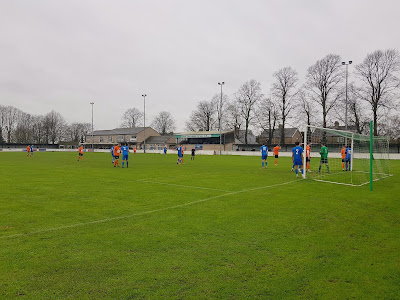 The main side of the ground is the northern side. The entrance is in the north-west corner and this leads to the clubhouse building. The roof of this extends out to provide a covered flat concrete viewing area for around a third of this side. Beyond this is a small uncovered section with four picnic benches and then the main stand set back from the pitch. This brick structure has an elevated wooden bench seating area with room for around 250 spectators which is reached via steps on either side of the structure. After the main stand there is then a further small covered concrete section towards the eastern end. 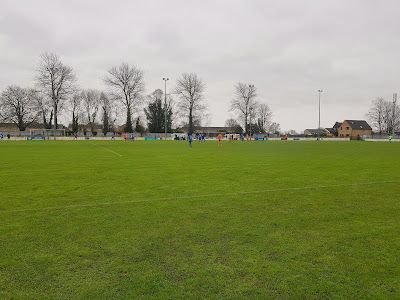 The southern flank of Julius Martin Lane is the only mainly uncovered side as it consists of hard standing with a large grass area behind a wooden fence. The two dugouts are located on this side. The eastern and western ends are similar with covered concrete standing areas extending for almost the whole of the sections behind the goal. The western end of the venue is also where the club car park is situated leading to the north-west entrance turnstiles. 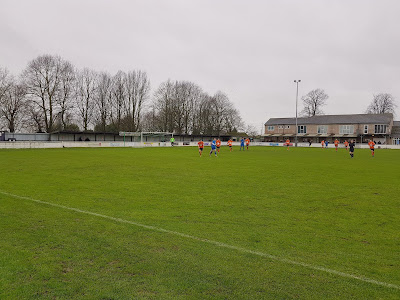 This game was a post-lockdown friendly between Isthmian League North Division side Soham Town Rangers and Southern League Premier Division Central side Royston Town. The first quarter of the game went the way of the higher league side as Royston raced into a third minute lead. It came about when the ball fell to an attacker in the area who controlled well, created space with a sidestep and poked the ball into the bottom corner. Soham didn't get to grips with the game until the 27th minute when a defender headed a corner off the bar and an incoming shot from the second phase of play was well saved by the Royston keeper. On the half-hour mark the Soham goalie had to be on top form to prevent a long range curling effort out of the top corner and going into half-time a single-goal lead for Royston was a fair reflection. The second half saw Soham put in a much better performance and it took less than two minutes for them to restore parity. A long ball upfield found Joe Carden who brought the ball down well, held off a couple of defenders and steered the ball past the keeper from just inside the area. Six minutes after this a Soham free-kick was on its way in before the visiting keeper prevented the ball from dipping under the bar. In the 59th minute the hosts went ahead for the first time - Joe Carden was in the mix again as he intercepted a very risky ball across the back by Royston. Carden got to the byline and squared for an attacker to slide over the line from a yard out. In the 65th minute Soham went further ahead as Carden grabbed a second goal when a nice ball was threaded through to him on the right side of the area and he squeezed the ball past the advancing keeper into the opposite corner. The home side were completely dominating by now and with a quarter of an hour left almost notched up a 4th when a corner was punched out to the edge of the area and a defender returned it with pace seeing the ball cannon off the crossbar. An bizarre incident then occurred in the 81st minute - a cross from the right was flapped at by the Royston keeper allowing a home midfielder to poke the ball over the line. Everyone stopped waiting for the linesman to flag for a goal but he never did. All spectators on this side of the ground could see it was in but the official must have been out of position not to see it. The home side weren't be denied though as they wrapped up with a fourth goal just before the final whistle to give a positive result after 5 weeks of no football. 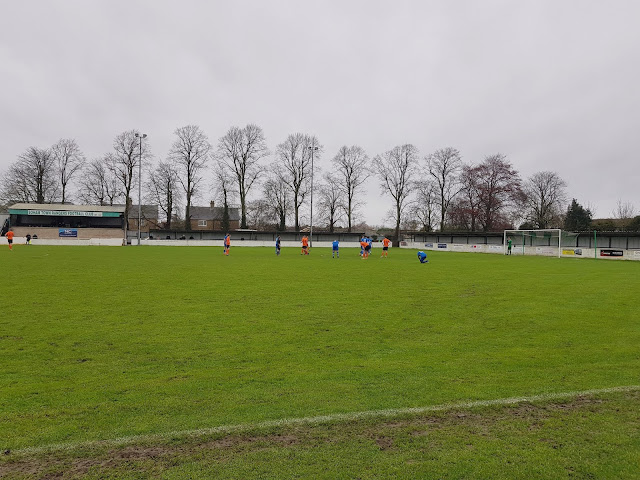