My thirty-fifth new ground of 2019 was on Friday 10th May at Pittodrie Stadium in Aberdeen, Scotland. The match was Aberdeen vs. Heart of Midlothian in the Scottish Premiership.

Pittodrie Stadium is situated around a mile and a half north-east of the city centre and is also the same distance from Aberdeen railway station. The venue is a few hundred yards from the North Sea with just a golf course and driving range in between the eastern end of the stadium and the beach. Aside from car parks the rest of the ground is mainly bordered by housing. Built in 1899 the venue has been home to the club and its previous incarnation ever since. 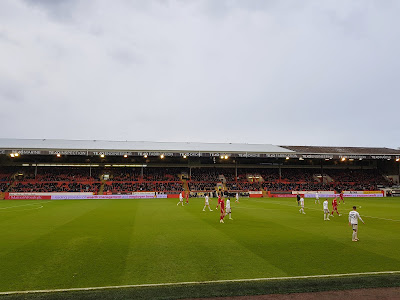 The Main Stand runs the length of the northern flank of the field. Though only the third-largest stand at the ground it does contain many of the club facilities including the reception, shop and ticket office as well as the players and officials entrances and dressing rooms. The single-tier stand has seating split into two sections with eight roof supports at the front of the upper section which restricts the views of all behind this point. At the back area areas for club officials as well as executive boxes above the seating deck. The north-east corner has the players tunnel and a police control box. The South Stand is the largest capacity structure in the ground with it able to accommodate 8,400 supporters. This includes away fans who are positioned at its eastern extremity. The stand is a large single tier deck where seating has been affixed to what was originally a large concrete terrace. This has a cantilever roof which allows unimpeded views of the pitch though the cover does not extend to the front of the seating area. I found this when the rain started while sat eight rows from the front of the stand. The seating extends past the end of the pitch into south-west quadrant with this section being completely uncovered and having a slightly restricted view of the western end due to the roof of that stand. At the back of the middle of the stand is a flat concourse section with food and drink outlets and hanging from the roof is the TV gantry. 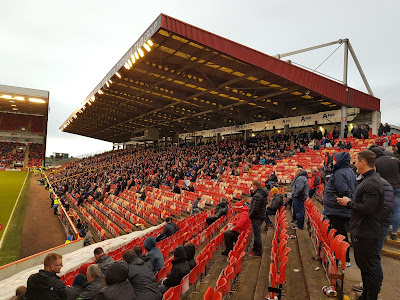 The Richard Donald Stand is the tallest strand so towers over the rest of Pittodrie. This is the only two-tier structure at the ground and has a capacity of around 6,000. It was built in 1993 to replace a large single-tier covered concrete terrace known as the Beach End. Similar to the South Stand in that it has a cantilever roof the views are uninterrupted while the sidewings to the stand ensure it is probably the most covered of the four sides of Pittodrie. As to be expected with a newer stand there are a row of a dozen executive boxes separating the two tiers with additional corporate facilities within the stand. The lowest side in the ground is the Merkland Stand behind the western goal. This stand has a couple of supporting beams towards the front of the stand to hold up the roof with a concourse along the back. This is the designated family end with its most notable feature being the granite facade by the entrance turnstiles. 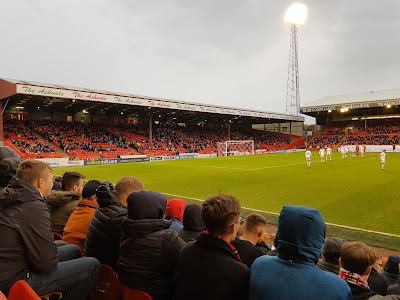 This fixture was the penultimate one of the season for each side. While Hearts had nothing to play for there was still a chance for Aberdeen to nick the final Europa League place if they could better Kilmarnock's points haul over the final two games. The home side were better in the first thirty minutes with Max Lowe, Sam Cosgrove and departing captain Graeme Shinnie linking up well down the right. Even so there were no real clear-cut chances created until the fourth minute of injury time when Oliver Bozanic nudged Jamie Brandon's cross towards goal and Clévid Dikamona got on the end of it shooting at Joe Lewis from close range. The second half was a better affair and the hosts went close in the 52nd minute when space opened up for Sam Cosgrove to sprint into the area but he shot straight at visiting keeper Colin Doyle who deflected wide for a corner. A couple of minutes later Aberdeen did take the lead - James Wilson crossed the ball in from the right and a Hearts defender managed to deflect the ball into the path of Lewis Ferguson who wasted no time in smashing it past Doyle from 10 yards. The home side were an improved mood after this and in the 60th minute another Cosgrove effort from just inside the area was denied by Doyle. Against the run of play Hearts grabbed a 65th minute equaliser after some poor home defending. Oliver Bozanic's cross from the right was nodded on by two Hearts players before falling to Bobby Burns who steered a deflected effort towards the net with the ball just rolling out of reach of Joe Lewis before nestling in the bottom corner. Aberdeen retook the lead with 13 minutes left to play - again it was set-up by James Wilson on the right who crossed into the box where Greg Stewart curled it first time into the back of the net from 12 yards. The nearest Hearts came to an equaliser in the final minutes was Clévid Dikamona's looping header from the edge of the area which landed on the roof of the net while Greg Stewart went close at the other end after clipping the ball over Conor Shaughnessy before snatching a shot just wide of the post. 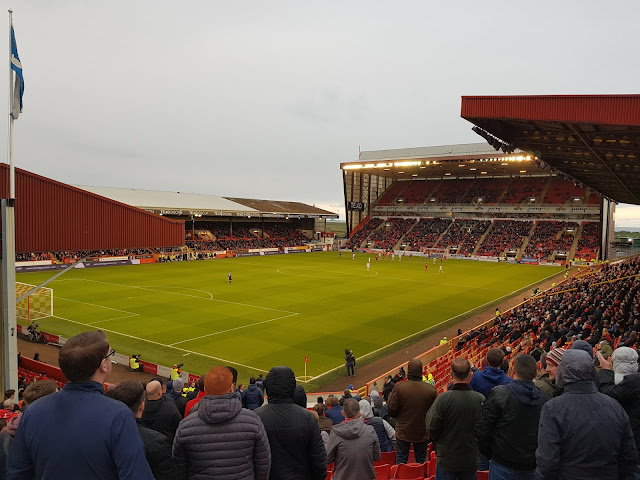