My fifteenth new ground of 2019 was on Tuesday 26th March at Bottom Meadow in Sandhurst, Berkshire. The match was Sandhurst Town vs. British Airways in Combined Counties League Division One.

Bottom Meadow is on the southern tip of Sandhurst with only a railway line separating it from the adjacent town of Blackwater. The football ground is within Sandhurst Memorial Park so in a large area of green space. The venue is three-quarters of a mile south-east of Sandhurst railway station and has been home to the club since 1997. 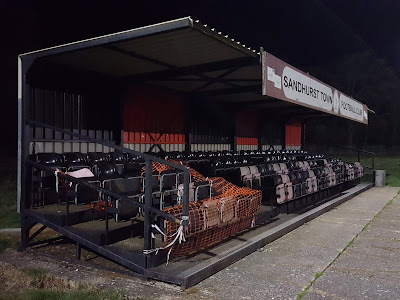 The sole stand at the ground is a 100 seat structure constructed in 2005, just to the south of the halfway line. Despite not being too old a portion of the stand is cordoned off with netting with a few seats having fallen by the wayside. The rest of this side is uncovered standing though with a large grass area behind the official standing area there is plenty of space on the southern side of Bottom Meadow. 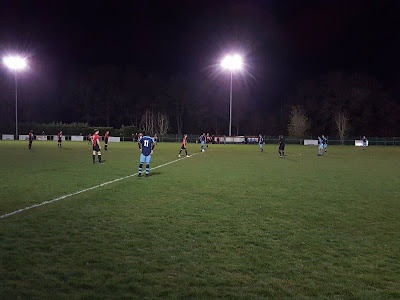 The northern, eastern and western sides are all uncovered standing. In terms of further structures the northern side has a single dugout for both teams and is has the narrowest spectator area at the venue. There is much more space behind the western goal and this has been chosen for the site of a small clubhouse including a bar, snack outlet and dressing rooms. Adjacent to this building are demountables and shipping containers to provide a home for club equipment. 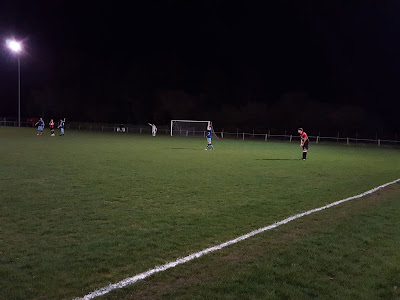 With both sides miles away from a promotion challenge or relegation threat there was little consequence to the evening's tie. The opening half-hour was mostly stuck in the midfield area with a huge number of possession turnovers due to the two sides being unable to keep the ball more than a few seconds at a time. The first real chance came in the 32nd minute when Sandhurst's Charlie Oakley ran down the left wing and shot across goal just wide of the post. Six minutes later the hosts nosed in front - they had managed to get the ball into the BA box and when Mitch Cooper chested the ball down it sat up nicely for Luke Burrows who drilled a great shot into the far corner from 15 yards out. Either side of the half-time whistle the home had good chances to score. Firstly, before the break, a crossfield ball found Paddy Gardener in acres of space on the right but just when it looked like he would find the back of the net he blazed over the bar. Then after the break a Luke Burrows cross from the left hit to the top of the crossbar. Sandhurst didn't have to wait too much longer though as goal number two arrived in the 65th minute. A Carl Prestidge through ball picked out Charlie Oakley who slotted low from 20 yards past the outstretched keeper. Just three minutes after the restart British Airways reduced the deficit back to one when a nice lofted found a midfielder who had got in behind the defence. He squared with the ball slid over the line from close range. Any hopes of the visitors getting anything out of the game were dashed with 12 minutes left to go. Good work by Callum Samuel saw him bundle his through the box and pass to Paul Rake who tucked in from a couple of yards at the back post. 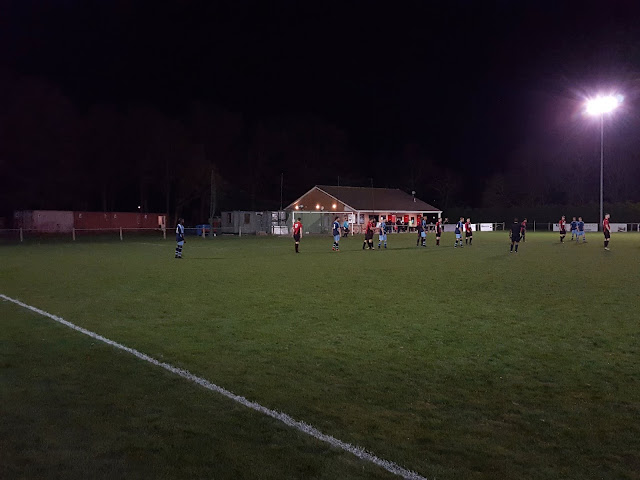