My fifth new stadium of 2013 was on Tuesday 12th March at the Ricoh Arena in Coventry, West Midlands. The match was Coventry City vs. Colchester United in Football League One.

The Ricoh Arena sits close to a retail shopping centre on the northern outskirts of the city. The venue is 4 miles from Coventry railway station although as the railway line runs adjacent to the ground there are plans to build a station at the arena. Coventry City moved to the stadium in 2005 after spending the previous 106 years at Highfield Road. After a long-running despite with the stadium owners the club left the venue in 2013 to groundshare at Northampton Town's Sixfields Stadium but returned a year later. 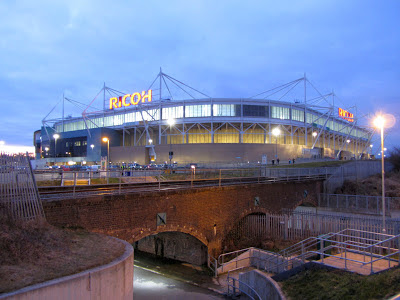 The Ricoh Arena is a 32,600 capacity bowl which is attached to a large building on the west side of the venue which contains an exhibition hall, hotel and casino. The West Stand itself is unlike the other three stands in that it has two tiers. The small upper tier links into the executive boxes at the back of the stand and also sits directly above a second group of executive boxes which separate it from the larger lower tier. 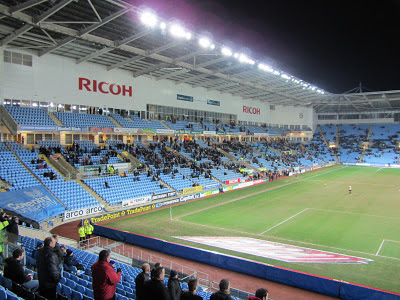 The remaining three sides of the stadium are single-tiered with the South Stand given over to away fans and the bulk of the home support residing in the East Stand. The stadium may have been built with Premier League football in mind but the club have struggled in recent years and when they played there the venue was often only one-third full. The groundshare arrangement with Northampton sees Coventry now play at the 7,600 capacity Sixfields Stadium. 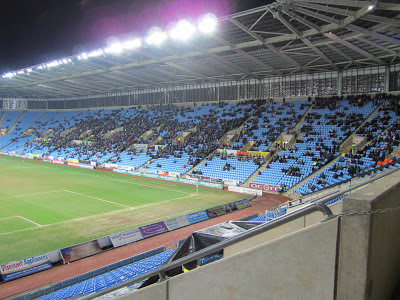 The game opened with Coventry dominating the first 10 minutes. They should have taken the lead when Cody McDonald went clean through on goal but his close-range effort came back off the post. Once Colchester had weathered this opening storm they became more stable at the back though found goalscoring opportunities at a premium throughout the half. While the hosts had more of the play, it was the visitors who took a surprise lead in the 39th minute when Gavin Massey barged through the home defence and clipped his shot past the goalkeeper. Coventry were booed off at the break and things did not improve in the early part of the 2nd half as Colchester denied the home side any space to get strong attacks going. The visitors were relying on counter attacks for their opportunities and in the 72nd minute one of these paid off as Clinton Morrison headed on a long ball to Michael Smith who slotted home to make it 2-0. Just a few minutes later Coventry pulled one back when Callum Wilson ran down the wing before cutting inside and unleashing a drive into the bottom corner. This galvanised Coventry and they put Colchester under a lot of pressure to try and force an equaliser. In injury time the away side gave away a free-kick just outside the area and Carl Baker slammed the ball into the net to make it 2-2. A demoralised Colchester almost lost the game in the final couple of minutes as Coventry searched for an unlikely winner but ultimately they ran out of time and had to settle for a point. 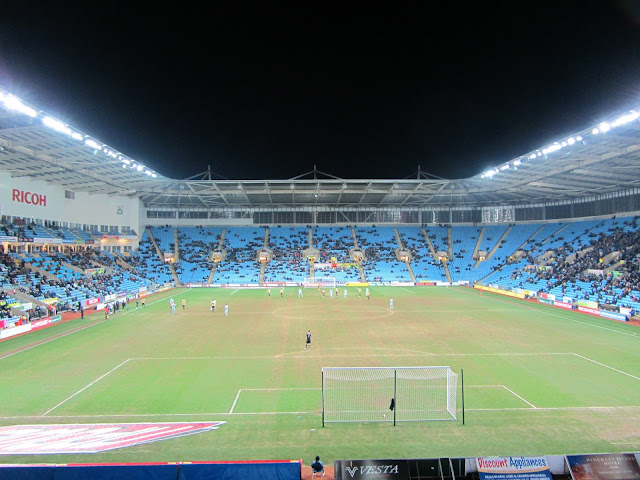