My twenty-ninth new ground of 2017 was on Tuesday 17th October at Rodney Parade in Newport, Wales. The match was Newport County vs. Colchester United in Football League Two.

Rodney Parade is close to the River Usk which runs through the city of Newport. The south-western side of the ground leads through to the Newport City Footbridge which links it to the new retail district and the rest of the city centre. The north-eastern side is bordered by housing with a primary school to the south-eastern end and the other half of the Newport sports complex to the north-western end. The ground is one mile east of Newport railway station on the other side of the river. Built in 1887 the venue has predominantly been used for rugby during its history. Newport County have played there since 2012 when they left the Newport Stadium after 18 years at that ground. 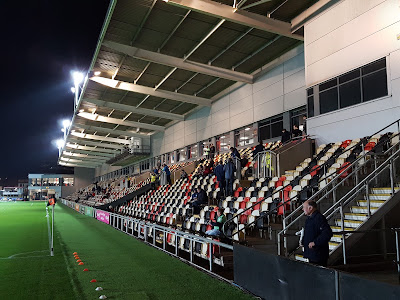 The entire length of the north-eastern side of the ground is taken up the Bisley Stand which was constructed in 2011. The smart stand has a capacity of 2,526 and includes corporate hospitality boxes at the back of the seating deck. There is also a TV gantry which overhangs the seating in the centre of the stand. The eastern section of this stand is usually given over to away fans. If there is a particularly large away following the other section that can be utilised is the uncovered Sytner Stand behind the goal at the south-eastern end. This temporary stand has been added to the venue in recent years and was last extended in 2013. Directly behind the stand is a large screen TV and there is a club building in the corner which includes the dressing rooms. 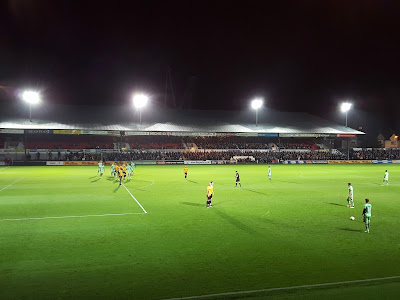 The Hazell Stand sits on the south-western side of Rodney Parade. This stand has a raised all-seater upper section which can house 1,996 spectators. Due to the stadium primarily being a rugby one its eastern end into the corner. The western end extends up level with the 18-yard line. The lower section is a concrete terrace but this is covered as the roof, which contains a number of supporting beams, goes out over this near to the edge of the pitch. The two dugouts by the half-way line are nestled very close to this standing section. With the stand stopping at the 18-yard line the final section of this side is uncovered terracing. The Grafton Road End is an uncovered concrete terrace. This end backs onto the rest of the complex which includes a full-size rugby/football pitch, a family zone including a large gazebo structure and a car park. There are a few additional buildings including a football club shop at the far end, a couple of Newport Gwent Dragons specific structures and a hospitality building in the corner with the Bisley Stand. 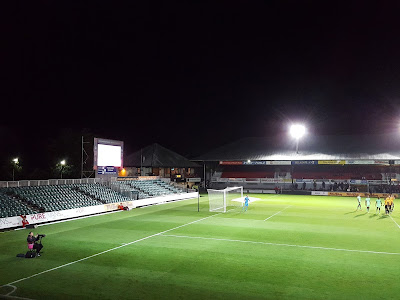 An even first half saw little in the way of chances in the opening period. The best one came in the 33rd minute as Doug Loft threaded a defence-splitting ball through to Brandon Hanlan who raced into the area. Newport keeper Joe Day reacted quickly and was able to close Hanlan down and deflect the shot into the side netting. Newport's best chance came in the 54th minute when David Pipe showed strength to win the ball in midfield before an excellent pass unleashed Pagraid Amond in on goal. Sam Walker was a match for him though and was able to palm the ball away to safety. From the resulting throw-in the ball was whipped in from the left and headed out as far as Ben Tozer on the edge of the area. Tozer shot into the danger zone and a deflection on the way through saw the ball come back off the post. The visitors managed to escape unscathed from this period of the game and in the 71st minute got their noses in front. Brandon Hanlan advanced from midfield, laid the ball off to Mikael Mandron on the left and his ball across the box was missed by a couple of players before landing at the feet of Ryan Jackson. The Colchester wing-back controlled the ball and shot low into the net from 12 yards out. Five minutes later Colchester doubled their lead when Sean Murray's free-kick into the area was flicked on by Mandron with the ball just getting past the outstretched arm of Joe Day before nestling in the bottom corner. Once going 2-0 up the away side sat very deep inviting Newport on. It was no surprise when the visitors grabbed a goal back in the 86th minute as Shawn McCoulsky headed in Dan Butler's lofted ball. The visitors seemed to realise at this point that continuing to sit deep would see Newport get more opportunities so modified the tactics accordingly and in the final minutes were more successful at running down the clock preventing the hosts from getting back on the ball. The full-time whistle signalled the first home defeat for County since March as Colchester went back to Essex with all three points. 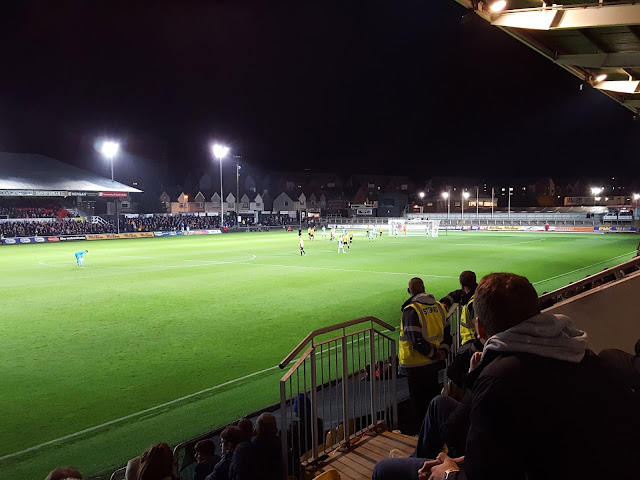