My ninth new ground of 2018 was on Saturday 31st March at Oxland Parc in Illogan, Cornwall. The match was Illogan Royal British Legion vs. Wadebridge Town in the South West Peninsula League Division One West.

Oxland Parc is located in the village of Illogan a couple of miles north-west of Redruth. The ground is bordered by housing on the northern, western and southern sides with a couple of additional smaller pitches on the eastern side with less dense housing beyond this. The nearest railway station is back in Redruth a couple of miles south-east. 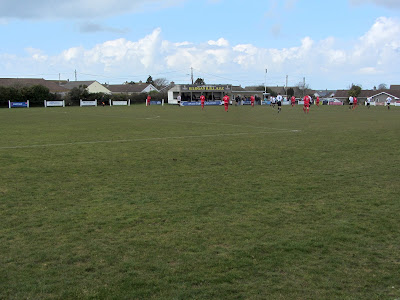 The entrance to the ground is in the north-west corner and leads into an area for car parking which is part on the western side and part on the northern side. The northern side has uncovered hard standing the whole way along and behind this is a clubhouse including a nice, spacious bar as well as a separate dressing room building. The western side of the ground has a food shed by the entrance followed by a small uncovered standing area in front of another club building and then the venue's main stand which ends just after the half-way line. This is a concrete stand with a wooden roof - the spectator area consists of four levels of concrete with wooden benching attached to it. The southern half of this side is uncovered grass standing which gets progressively narrower due to the road running alongside the ground. 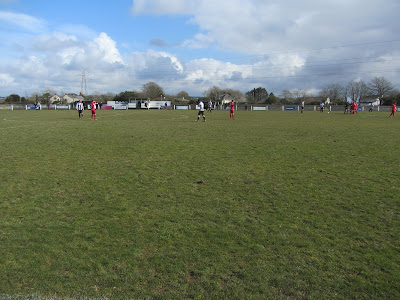 On the eastern side there is a very small stand near the half-way line which provides covered seating on wooden benching. Otherwise there is a pretty narrow spectator area of uncovered grass standing which runs between the pitch and the concrete wall separating it from the additional pitches at the complex. The two dugouts are also on this side. The southern end is the most sparse as it has uncovered grass standing which slopes gently uphill. Due to the proximity of a road and a two houses behind there is netting behind the goal to catch any loose balls. The venue does not currently have any floodlights so the club will be unable to progress beyond their current 11th tier status though they only reached this level for the first time in 2014. 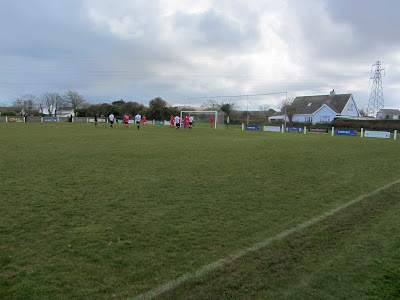 With both sides in lower mid-table there was little to play for and the game was a rather poor affair in the early going. The first real action was in the 26th minute when a corner was dropped by the Illogan keeper but Kyle Flew snatched at the rebound and lofted over from close range. The best opportunity for the hosts arrived in the 33rd minute when a cross from the left almost beat Wadebridge goalie Rob Rosevear who had to stretch to tip over. Wadebridge were on top for much of the second period, ten minute after the break a free-kick unleashed a wing-back down the right and his cross in was perfect for Dan Jennings but the home keeper made himself big and saved Jennings' effort well. On the hour Jennings spurned another chance when a misjudged back header let him in on goal but he shot well over. For Illogan's part their best play of the match was in the 64th minute when a free-kick was headed towards goal requiring a really good save by Rosevear to keeper it goalless. The last meaningful chance came in the 86th minute when an Illogan shot was blocked on the line. The second half was decent enough as a spectacle but the finishing of both sides was poor resulting in a goalless draw. 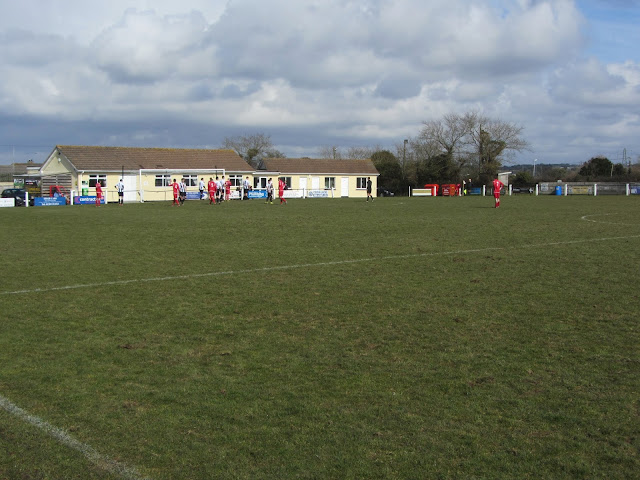