My sixty-first new ground of 2011 was on Wednesday 21st September at Stamford Bridge in Fulham, London. The match was Chelsea vs. Fulham in the Carling Cup 3rd Round.

Stamford Bridge is 300 yards from Fulham Broadway tube station on the District Line. The venue was built in 1877, and was initially used primarily for athletics until Chelsea FC were formed in 1905, with them becoming the main occupiers of the ground from this point onwards. 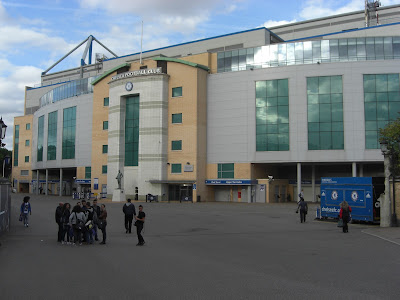 The ground has four distinct stands which have undergone varying levels of development in recent years. The Matthew Harding Stand sits behind the goal on the north side of the ground and is a two-tiered stand with a capacity of just under 10,900. It was completed in 1996 and houses the most vocal Chelsea support in its lower tier. Behind the opposite goal on the south side of the ground is The Shed End - a smaller two-tier stand which can hold 6,800. It was finished in 1997 and is where away fans are positioned. 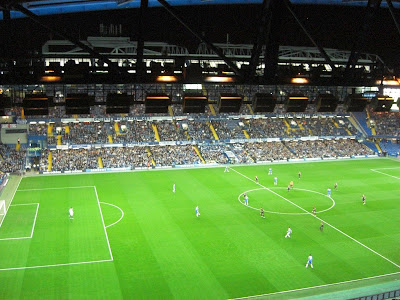 The oldest stand in the venue is the East Stand - a three-tiered structure running alongside the pitch with a capacity of just over 10,900. This was built in 1973 though has been refurbished and modernised since then. This stand also contains the dugouts, dressing rooms and media centre. Across from this is the largest stand in the ground - the West Stand. This 13,500 capacity three-tiered stand was built in 1998 though not fully completed until 2001. I watched the game from the upper tier of this stand. 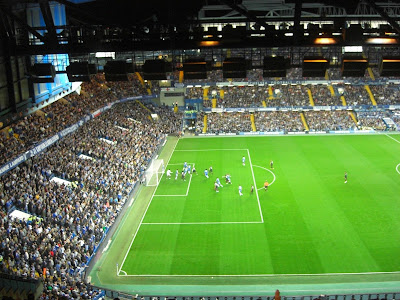 The game was a League Cup 3rd Round tie between Premier League sides Chelsea and Fulham. The first period had sporadic bursts of action and the home side thought they'd taken the lead just before the break only to have a Daniel Sturridge goal ruled out for offside. Immediately after the restart the visitors were awarded a penalty and Chelsea reduced to ten men after Alex was sent off for a tackle on Kerim Frei. However, Fulham missed the penalty and Chelsea seemed to be spurred on by this creating a host of chances in the second half. They were unable though to find the net and so after 90 minutes the scores were tied at 0-0. Another half-hour of extra-time also failed to produce a goal so it was left to a penalty shoot-out, with Chelsea triumphing in this 4-3 to go through to the next round. 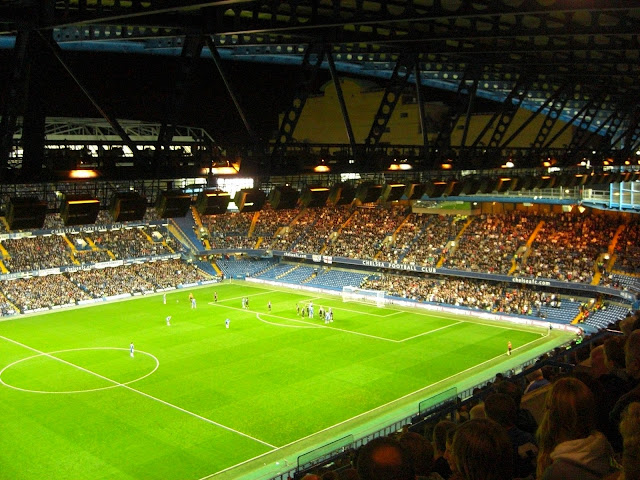