My seventeenth new ground of 2017 was on Tuesday 1st August at Llanelian Road in Old Colwyn, Conwy, Wales. The match was Colwyn Bay vs. Airbus UK Broughton in a friendly.

Llanelian Road is in the south of Old Colwyn close to the coastal settlement of Colwyn Bay. The ground is adjacent to housing on its southern and eastern sides with fields to the north and west. The venue is 1.5 miles south-east of Colwyn Bay railway station and has been home to the club between 1984-1992 and from 1994 to the present day. 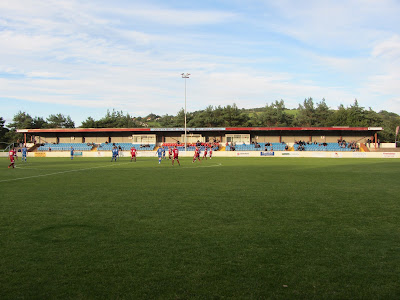 The main stand runs the length of the eastern side of the ground and was completed in 2012. Originally a large terrace the 500-seater structure was built to enable the club to play at National League level. In addition to the seating this has three directors boxes at the back and a floodlight sat directly in front of the middle of the stand. There remains a small amount of uncovered original terracing at either end of the stand. On the opposite side of the field are two stands - the Glynne Owens Stand and Margaret Jones Stand. These were recently all-seater ones as well but the seating has since been removed so now consists of two levels of concrete terracing. The two stands run most of the length of the field with a gap in the middle for a gantry and the two dugouts which are part of the stands. 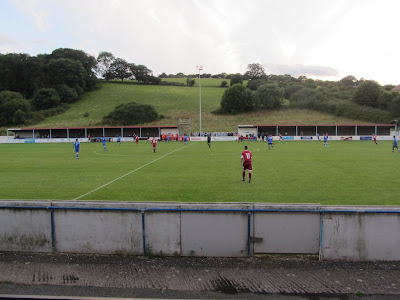 The north terrace sits directly behind the goal at this end of Llanelian Road. The two levels of concrete terracing are covered by a roof with the rest of the northern end uncovered standing. The southern end is uncovered standing on a large concrete area. Behind the viewing zone is a club building with a sizeable lounge and a snack bar. There is a demountable containing the club shop in the south-east corner and in the south-west corner a tiny disabled viewing stand. This has one bench with 8 seats attached to it. There is a little more room on the bench next to the seating meaning around 12 people may be able to fit in there. 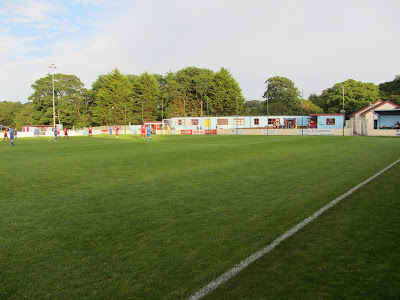 The game was between Northern Premier League Division One North side Colwyn Bay and Cymru Alliance League side Airbus UK Broughton. The visitors edged the early going at took the lead in the 12th minute when a superb 25-yard free-kick from Leo Riley found the top corner. Airbus UK stayed on top until a very costly 11 minute spell in the second-quarter which saw them concede three times. The first of these came in the 25th minute when a ball over the top found Jamie Rainford. All the Airbus players thought he was offside and stopped giving Rainford time to control the ball before striking at goal. The home keeper was able to save the first effort on the edge of the box but the ball bounced back to Rainford allowing him to stroke into an empty net. In the 32nd minute Colwyn went 2-1 up with a goal which came about in near-identical circumstances - a failed offside trap saw a ball over the top find Jack Hindle in acres of space and he calmly sidefooted past the keeper from 12 yards. The lead was further extended in the 36th minute when the ball was chipped to Astley Mulholland who controlled well in the box before slotting low past the keeper. Colwyn should have killed the game off just before the break after excellent work by Mulholland down the left wing resulted in him curling the ball out to the right wing for an unattended Hindle who with only the keeper to beat blazed it over bar. Airbus were more competitive in the opening of second half but the best chance in the third-quarter fell to the hosts in the 64th minute when Jack Kelleher outmuscled a defender in order to go one-on-one with the visiting keeper who was up to the task of stopping the scoreline getting worse. The away team then grabbed a goal out of nowhere in the 72nd minute. With the home side half-asleep a quick Airbus free-kick found Obi Anorou unmarked in area. Anorou got a shot away from a tight angle and the home goalkeeper was only able to deflect the effort into roof of the net. Both teams were going for it in the final ten minutes with this friendly being played in a real competitive spirit. However there were no more goals allowing Colwyn to record a 3-2 victory. 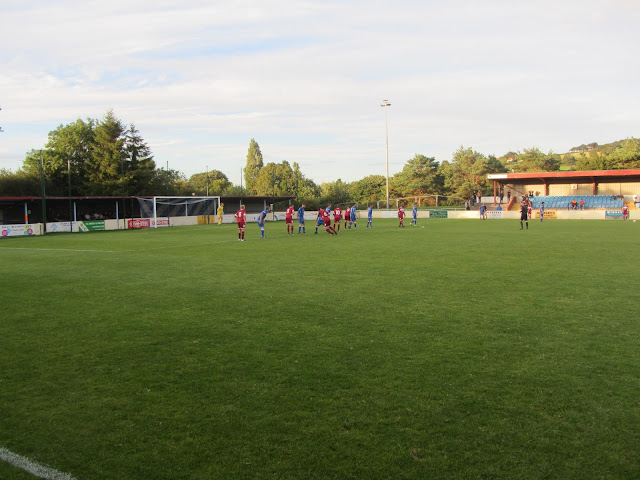