My twenty-first new stadium of 2019 was on Saturday 13th April at Gigg Lane in Bury, Greater Manchester. The match was Bury vs. Colchester United in Football League Two.

Gigg Lane lies in the south of the town and is mostly bordered by trees including Starkies Wood to the west. Apart from this there is housing to the south and east and a residential care home to the north-west. The northern side is the only one not hemmed in so is used as a car park as well as having concrete mini pitches and the club shop set some way back from the ground on the edge of Gigg Lane itself. The venue is one mile south of Bury tram station on the Manchester Metrolink and has been home to the club since they were formed in 1885. 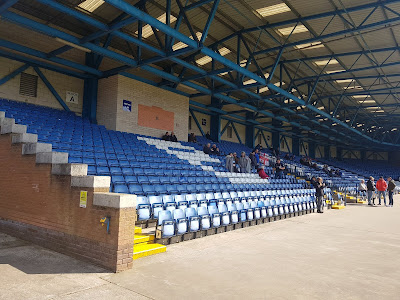 The ground was completely rebuilt during the 1990s to convert it to an all-seater venue but it does have the appearance of an older venue given that three of the sides have supporting roof pillars in front of the seating areas. The Main Stand, renamed the Neville Neville Stand in 2015, is on the northern side of the ground. The seating deck is raised above ground level giving an odd look to the lower area which contains the seating sections for staff and players from the two sides as well as the players tunnel leading back into the dressing rooms contained within. Unusually rather than placing the hospitality areas at the back of the stand they sit in the middle of the ground level as demountable structures looking out onto the pitch. The Main Stand runs up to the edge of the Manchester Road End behind the western goal. In the south-east corner the quadrant between the Main Stand and the Manchester Road End is home to a football college building. The 2,100 capacity Manchester Road End end runs around two-thirds of this side of the ground with trees in place beyond the end of the penalty area line in the south-west corner. The limited space in this corner has been utilised for a toilet block with a big screen placed atop it. 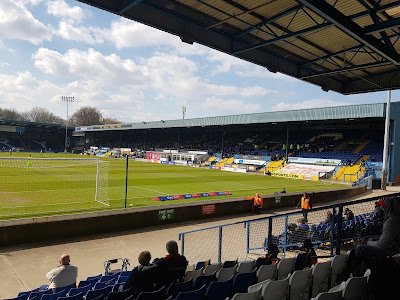 The opposite corner on the north-east side of the ground is also limited due to adjacent housing. This means the 2,500 capacity Cemetery End behind the eastern goal is a mirror image of the Manchester Road End with the stand only running two-thirds of this side up to the end of the penalty area. The main difference between the ends is that the Cemetery End is the only structure in the venue not to have supporting beams in front of the seating. This end is currently used for away supporters. The Cemetery End is linked up with the South Stand, also known as the Les Hart Stand, by a quadrant in the south-east corner. The quadrant has a police control box and digital scoreboard hanging from the roof. However, in 2016 this quadrant saw fencing installed after issues between home and away fans which has resulted in the loss of use of 660 seats. This had the effect of reducing the overall stadium capacity from 12,500 to 11,840. The South Stand has a TV gantry suspended from its roof and there is a disabled section carved out of the seating area at the front of the middle of the structure. 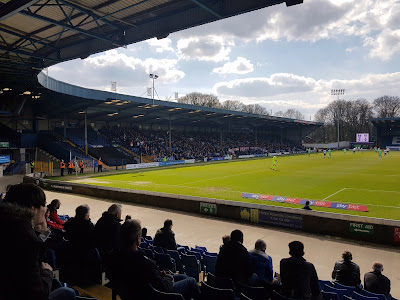 In the midst of financial problems Bury's promotion push was in danger of being derailed after three straight defeats. Meanwhile Colchester were themselves running out of games to get in amongst the play-offs so it was an important game for both sides. Colchester started brightly and were the better side in the early minutes - the closest the visitors got came in the 7th minute as a 25-yard effort from Tom Lapslie was tipped over by Joe Murphy. The hosts gradually came on stronger as the half progressed and went close in the 33rd minute when Jay O'Shea had a couple of shots from inside the box blocked by U's defenders. In truth it was a fairly tepid half but the Shakers raced out of the traps in the second half - in the 48th minute Nicky Adams picked up the ball in his own third of the field and played a super defence-splitting ball to Dom Telford who headed into the area but shot straight at Rene Gilmartin. This led to a series of corners which culminated in the opening goal of the game. Adams was again involved as his long corner found Nicky Maynard at the back post who headed it back into the centre for Dom Telford. Unfortunately for the visitors their goalie Rene Gilmartin wasn't there having made a complete mess of the corner and ended up way out of position so this allowed Telford an easy header into an open goal. Colchester tried to get back on even terms and almost managed it in the 58th minute. Courtney Senior laid the ball off to Sam Saunders some 25 yards from goal. With a packed area in front of him Saunders decided to shoot and his shot came back off the crossbar with Bury keeper Murphy beaten. Eight minutes after this a key second goal arrived for the hosts. Nicky Maynard did well to beat Kane Vincent-Young by the corner flag on the right side and hit a ball into the box where Dom Telford stooped low to head towards goal. The ball went through Gilmartin and into the back of the net putting Bury in a commanding position. With Colchester's dismal record in salvaging points from games in which they trail this was the end of the game as a contest. The U's did have one last chance and it was another long range effort from Sam Saunders which was tapped over by Joe Murphy. Bury had looked comfortable in the second half though and reignited their League One ambitions. 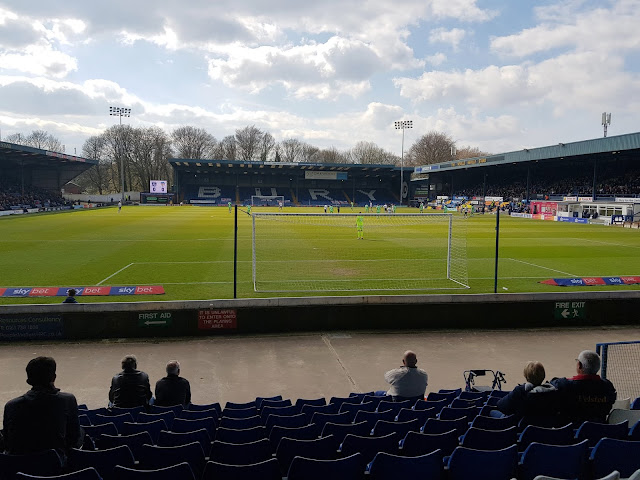