My seventeenth new ground of 2019 was on Saturday 6th April at the Terence McMillan Stadium in Plaistow, London. The match was Lopes Tavares vs. Newbury Forest in Eastern Counties League Division One South.

The Terence McMillan Stadium is part of the Prince Regent Lane Playing Fields in the Docklands area of London. The site is shared with two separate complexes, the Newham Leisure Centre and the Newham Multi-Sport Centre. The former is directly south of the ground while the latter is to the west with the venue's stand built into the side of it. The playing fields continues beyond the trees to the north while the eastern side is bordered by a healthcare centre. The venue is served by a number of rail options - one mile west is Canning Town station on the Jubilee Line, one mile north is Plaistow station on the District Line and one mile south are Custom House and Prince Regent stations on the DLR. The ground is currently home to Fire United and Lopes Tavares but in recent years has also served as the base for London APSA, Canning Town, Newham and Woodford Town. 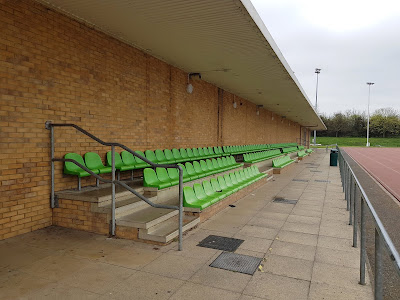 A few years ago the western side of the ground used to have a free-standing structure with six rows of bench seating giving a seating capacity of around 400. After it fell into disrepair several sections of the stand were closed before the whole thing was eventually demolished. This was around the time the Newham Multi-Sport Centre building was constructed and the decision was made to build a new stand into the side of that building with the overhanging roof providing cover for the seating. The revised arrangement consists of 192 bucket seats installed across three levels of concrete. The other building of note is a demountable by the entrance hut in the south-west corner which serves as a basic clubhouse. 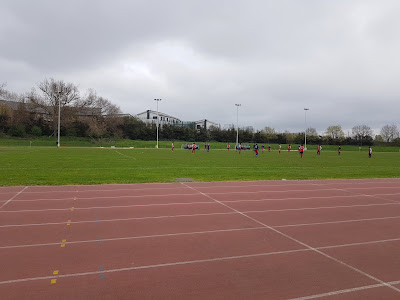 This is the sole stand with the rest of the ground uncovered standing behind a metal fence at the edge of the eight lane athletics track which encircles the pitch. The eastern and northern sides at least have grass banks behind the hard standing area to give better views. This is relevant for the eastern side which has a long jump area beyond the running track resulting in spectators being even further from the action than the western side. The two dugouts also sit in front of the running track on this side. The southern end of the ground is bordered by the Newham Leisure Centre so the spectator area stops halfway round this side but with crowds sometimes dipping into single figures this is a moot point. 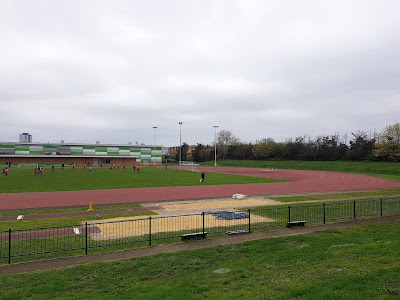 The tie was between two sides in the bottom four places in the division but the way the game went you would have assumed there was a much larger gulf. Lopes could have taken the lead in the 8th minute when Mario Embalo headed on a corner and saw away keeper Bradley Simpson save the ball on the goalline with it clipping the post as a defender scrambled to clear the danger. The early portion of the match saw two very open defences with attackers lacking the all important touch in the area resulting in the ball being lost in good positions. That changed in the 34th minute when Lopes grabbed their first of a fruitful afternoon.With the ball up in the air Mario Embalo nudged it up for Sulaimana Ba who produced a great scissor kick which Simpson could only push into the corner of the net. Three minutes later the hosts doubled their lead out of nothing - with the ball bouncing around 25 yards from goal Quadri Olemoh absolutely walloped it into the roof of the net giving the goalie no chance. In the 52nd minute Lopes extended their lead in very similar circumstances. Again there appeared to be little danger with the ball 25 yards from goal but this Tigana Quebe took a pot-shot which ended up in the roof of the net. The chances kept arriving for the home side - in the 55th minute Ba was played clean through before he dragged his shot wide from inside the area. In the 66th minute Quebe did well down the right, clipped a cross to the back post but Suley Djalo responded by blatantly pushing the ball into the net with his hand resulting in a disallowed goal and a caution. Newbury goalie Simpson prevented another in the 69th minute when he saved Embalo's shot after he had been played in on goal. The fourth goal did arrive in the 72nd minute and it was finally Embalo on the scoresheet as he picked up the ball on the left of the area, cut inside to beat a defender and shot through the keeper's legs. A couple of minutes later Suley Djalo dispossessed Kingdom Dawson in his own area and squared for Tigana Quebe who only had to knock into an empty net. Inexplicably Quebe then miscued his shot so badly it almost went off for a throw-in provoking amusement in the small crowd. The home side were all over Newbury during this spell with shot after shot going over. With confidence high the skills started coming out as Lopes tried to cap the day with a perfect goal. In the 84th minute they grabbed their fifth of the game and it was Embalo netting his second of the game, stroking under the keeper in the area after Sulaimana Ba's assist. In the 89th minute a bad day for Newbury improved slightly with a consolation. A long ball was missed by home defender Quadri Olemoh letting in Jason Reynolds-Blanche. As Lopes goalie Januario Vaz Gomes came out the Newbury attacker rolled the ball to Francesco Cicconi to knock into an empty net from a couple of yards. Just over a minute later the referee called time on a big win for Lopes Tavares who arrested any lingering worries about relegation with a thumping win. 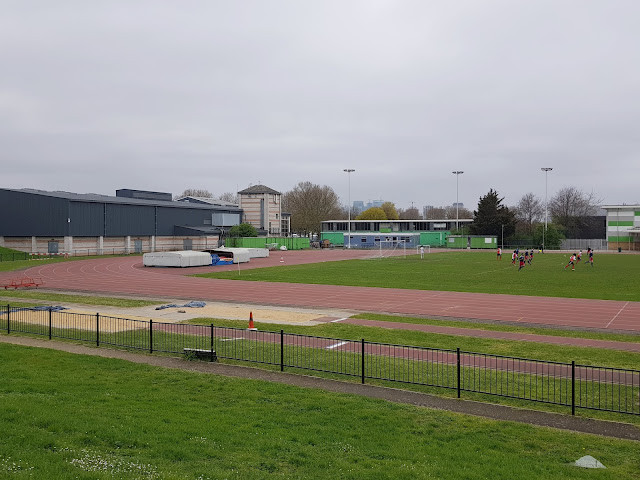