My fifty-third new ground of 2019 was on Friday 6th December at Volksparkstadion in Hamburg, Germany. The match was Hamburg vs. Heidenheim in 2. Bundesliga.

Volksparkstadion is located in the 500 acre Altona Volkspark in the north-west of the city. The complex has a training centre on its southern flank with several half-sized pitches. The eastern side is adjacent to car parks as is the western side though part of this side remains as a park. Across the road on the northern side is the 16,000 capacity multi-purpose Barclaycard Arena which opened in 2002 to play host to concerts and there are attached handball and ice hockey venues linked to this. The nearest railway station is Stellingen (Arena) Station on the city's S-Bahn which is one mile due east. A stadium has stood at the site since 1953 with the club moving in upon the creation of the Bundesliga in 1963. The original ageing stadium was demolished in 1998 with the current venue opened in 2000. 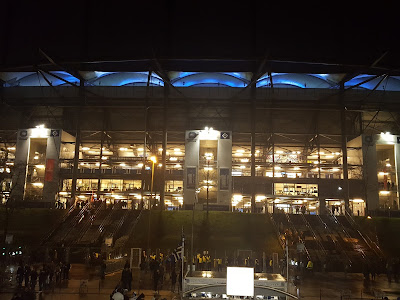 The ground is a two-tier bowl the whole way round with the upper deck around twice the size of the lower one with it being split into two seating sections as a result. The only notably different stand is the East Stand which has two levels of corporate boxes in between the two tiers as well as a media section at the front of the upper tier with desks and a set of boxes for indoor working. There is also a single level of corporate boxes running the length of the West Stand in between the two seating decks. 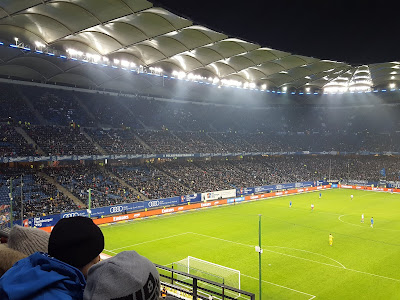 The venue is seating except for two designated areas. The main one is the lower tier of the North Stand which inhabited by the club's ultras. The second is in the south-west corner and is assigned to away supporters who have a choice of a using a standing or a seated area. The result of this is that the stadium has a capacity of 57,000 for domestic games but 51,500 for European ties. As to be expected from a relatively new stadium there are spacious concourses which run between the stands and contain an inordinate number of food outlets and merchandise stands. The north-east corner of the stand houses many of the stadium facilities such as the club shop, ticket office and the HSV Museum. 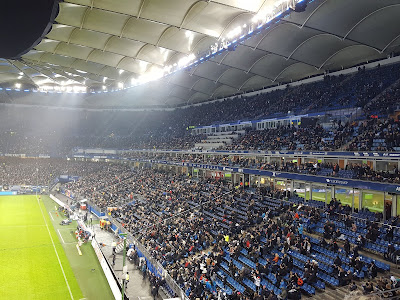 This was an important clash between 2nd and 4th in the table where a win for Hamburg could see them move to the top of the standings if Arminia Bielefeld lost their game which was taking place at the same time. Right from the outset this game would be marked by HSV dominating the ball with Heidenheim sitting back and launching sporadic counter attacks. One of these attacks almost resulted in Heidenheim taking a 16th minute lead when a ball over the top was headed out as far as Tim Kleindienst who cracked a 20 yard half-volley off the post. The hosts failed to test Kevin Muller in the away goal and it wasn't until the 51st minute that the first decent save was required when he got down low to deflect Sonny Kittel's shot behind the goal. Hamburg went close again in the 65th minute through a 20 yard drive from Jeremy Dudziak which went just wide of the post. Despite sitting back for the majority of the evening Heidenheim were still carving out good chances and Tim Kleindienst should have done better with a quarter of an hour left to play when the ball reached him on the left side of the area and he drilled an effort into the side netting. The deciding moment came nine minutes from time - Konstantin Kerschbaumer hit a long range effort back off the crossbar and Tim Kleindienst reacted quickly to beat the keeper to the ball to head it back into the six yard box where Jonas Fohrenbach only had to knock into an empty net. HSV laid siege to the away goal in the closing minutes but Kevin Muller stood his ground and repelled all efforts. The hosts ended the game with 76% possession, double the number of shots and five times the number of completed passes of their opponents. However they were wasteful in front of goal, Heidenheim were not and they were rewarded with three points to take down south with them. 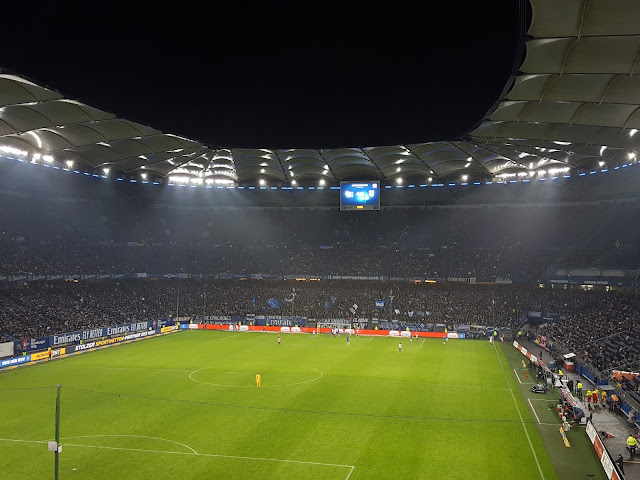