With it being Easter Monday there were a variety of kick-off times across the divisions and I took this opportunity to fit in two games in one day. The first of these was the 11:30am kick-off at Colliers Wood United. I walked to Wibbandune Sports Ground from Raynes Park station which was around 1.5 miles away.  The ground has been home to Colliers Wood United since 1991. 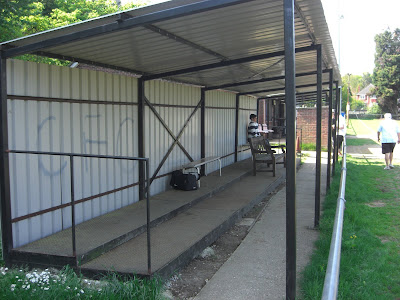 The venue sits just off the Kingston Bypass so anyone arriving by car has to do a sharp left turn off the main road and straight into the ground. When you turn off into the venue you walk through a small car park which merges into the ground itself. Because of this I managed to walk straight into one of the stands without seeing anyone to pay an entry fee to, although later on a man came through the stand to collect the £6 entry fee and give me a match programme. The near side of the ground contained a small clubhouse, a row of about a dozen seats and brick dugouts which were part of the larger structure. There are another couple of stands further along the same side of the ground which had a few benches in them for fans to sit on. 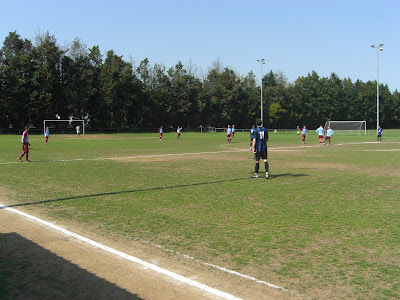 The far side of the ground has a small all-seated stand with about 100 seats in it with the rest of that side backing onto training pitches where the players were warming up before kick-off. The two ends of the ground are surrounded by tall trees which provide a natural sound barrier against the main road which is just a few feet from the pitch. 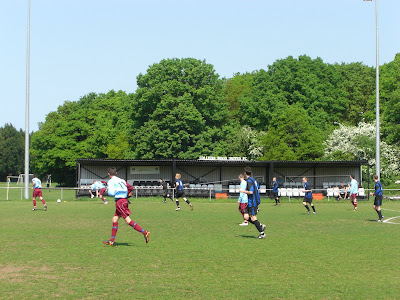 The game was a rather dull one with neither side able to make a breakthrough during the ninety minutes. There was little in the way of chances in the first half, with the best opportunity of the period falling to Colliers Wood United with one of their players missing from a couple of yards out after snatching at his shot. The second half was little better with the most enlivening moment being when a dog ran onto the pitch and caused play to be temporarily halted. No-one was able to score during the remainder of the match so the tie ended goalless.