My thirty-second new ground of 2018 was on Tuesday 20th November at The Creek in Sea Mills, Bristol. The match was Bristol Manor Farm vs. Bideford in Southern League Division One South.

The Creek, as its name would suggest, lies close to the banks of the River Avon which runs along its western side. There is a narrow section of land between the ground and the river where the Severn Beach Line runs which provides commuter services into Bristol from north-west of the city. To the south of the ground is an inlet of the river and on the other side of this is the nearest railway station at Sea Mills which is just a few hundred yards from the ground. The eastern side is bordered by the A4 Portway road into the centre of Bristol so the northern end of the only one where the ground is not completely hemmed in. Beyond the northern end is the Portway Rugby Development Centre which also provides welcome car parking for the site which is otherwise limited for space. The venue was originally used as a sports club by the port authority but has been home to the club since 1965. 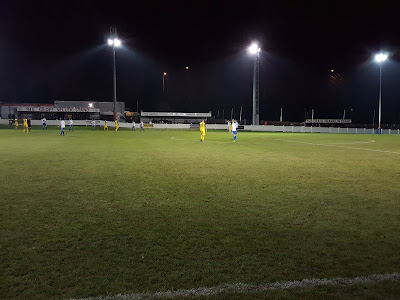 The eastern side of the ground slopes downhill from north to south and has three separate stands. The Geoff Sellek Stand was originally a three level metal terrace but the front two rows have since had 52 seats bolted onto them leaving just the back row for standing. There is then an 100 seat stand which runs over the halfway line and finally the Craig Franklin Stand which is just a covered hard standing section. The remainder of this side is uncovered hard standing. Behind the Geoff Sellek Stand are the dressing rooms and a club building with a bar and boardroom. 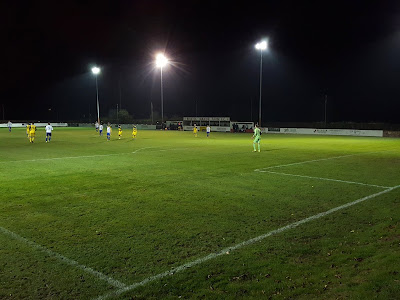 The rest of the ground is uncovered concrete. As alluded to the venue has little space around it so each side is fairly narrow leaving the eastern side as the ones for most fans to congregate on. The western side does have a covered section of hard standing in the middle and the two dugouts are either side of this. There is netting the entire length of the pitch due to the adjacent railway line. This netting is replicated behind the goals as well to prevent balls ending up in the river or the rugby club car park. 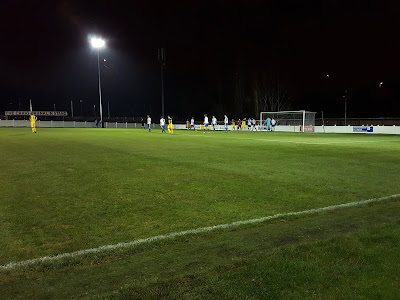 Bristol Manor Farm were towards the wrong end of the table going into proceedings and in the opening minutes went close to going behind. In the 5th minute keeper Ben John dropped a cross resulting in scramble with the ball not quite making it over the line. A minute later though John pulled off a great double save from close range efforts from Ryan Turner and Ben Wood. After this came an astonishing six minute spell where the hosts netted three times. The first came in the 8th minute as Jamie Bird's dipping 25 yard shot found the bottom corner of the net. Almost straight from the kick-off Bristol got the ball back and forced a corner. From this the ball was cleared as far as Ashley Kington who drilled a shot into the area, saw the ball bounce back to him, and then shot into the same area of the net as Bird had two minutes prior. The third goal arrived in the 14th minute when Kai Fisher headed in a corner from the left. Bideford had to arrest the slide and rejigged their tactics after this meaning the rest of the half was a more even contest. Even so it was the hosts who went closest before the break - in the 41st minute Lewis Bamford was in on goal but shot straight at the keeper as a defender closed in on him from behind. The game seemed dead and buried in the 52nd minute as Manor Farm went 4-0 up - a nice one-two between Jordan Metters and Jamie Bird was finished off by Metters stroking home from inside the area. Rather than heads droppping this actually signalled the start of Bideford's fightback. In the 59th minute Sean Dowling went on a mazy run before cannoning a shot back off the crossbar from just outside the box. As players in the area went for the rebound Ryan Turnet was felled and the referee pointed to the spot. Dowling dispatched his spot-kick into the bottom corner just out of reach of the keeper who dived the right way. Two minutes later Dowling was on the scoresheet again. He was assisted by Ben Woods who snuck past the home defence into the penalty area and squared for Dowling to knock in from six yards. The visitors were in the ascendancy and over the following minutes they had another couple of decent efforts. In the 81st minute Manor Farm were given a chance to kill the game off when away defender Craig Allan was dispossessed on the edge of his own penalty area and reacted with a shirt pull. Ashley Kington was looking for his second of the game but blazed a terrible penalty way over the goal. In the final minute of the ninety the score went to 4-3 when a Bideford free-kick was lofted into the area and nodded on for Jordan Ricketts to poke home. This nervy finish saw tensions boil over in injury time. Manor Farm's Jack Durrant appeared to intentionally stand on a Bideford player which sparked a lot of pushing and shoving. While Durrant escaped punishment the same couldn't be said for Bideford's Craig Allan who was sent off for raising his hands. This was the final action of an exciting game as Manor Farm held on for a 4-3 victory. 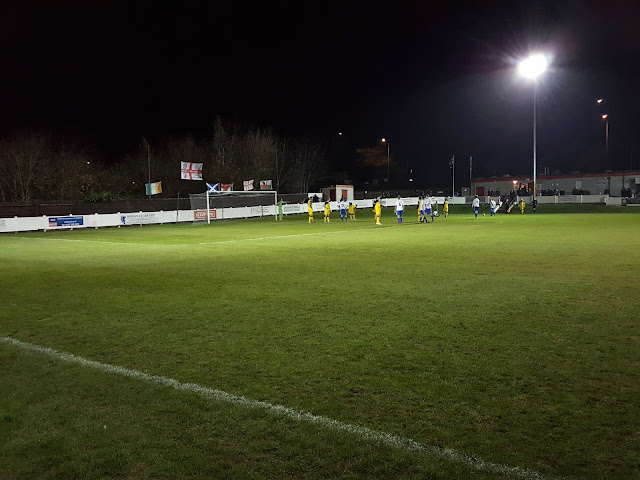