My sixty-seventh new ground of 2011 was on Wednesday 12th October at Chadfields in Tilbury, Essex. The match was Tilbury vs. Romford in Ryman Isthmian League Division One North.

Chadfields is located just under a mile from Tilbury Town railway station in a residential area on the northern outskirts of the town. It has been home to Tilbury since 1946. 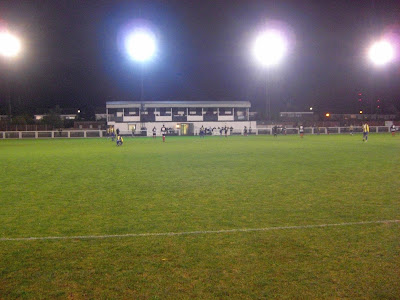 The ground has two all-seater stands which differ greatly in style. Running alongside the pitch on the east side of the venue is the larger of the two stands, a two-storey structure which holds the changing rooms on the bottom floor and just over 160 seats on the upper floor. This stand is unusual due to the numerous supporting struts which give the impression that you are looking out of large windows. 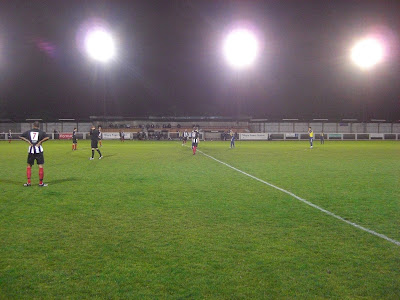 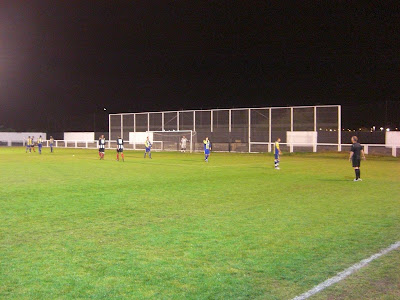 The game did not take long to produce the first goal with Tilbury netting after just 6 minutes when a striker snuck in front of the goalkeeper to head a cross into the goal. Romford then reacted to going behind well and in the 18th minute levelled the scores after the home side failed to clear their lines while the ball was in their box with Romford rifling home from close range. The visitors continued to be on top but just before the interval switched off during a Tilbury corner which was headed over the line to give the hosts a 2-1 lead. In the second period Romford had lots of chances but when they missed an open goal on the hour-mark it looked like it wasn't going to be their night, and sure enough not long after a mix-up in the Romford box allowed Tilbury to deliver a clinical finish into the corner of the net to increase their lead. As the visitors streamed forward in the closing minutes they again failed to clear the ball from their box on a rare Tilbury attack and a scuffed shot bounced over the goalkeeper to make it 4-1 which is how it finished.