My fortieth new ground of 2019 was on Saturday 27th July at Gayfield Park in Arbroath, Angus, Scotland. The match was Arbroath vs. Alloa Athletic in the Scottish League Cup.

Situated on the seafront in the south of the town Gayfield Park is believed to be the closest ground to the sea in Europe. There is only an access road separating the southern side from the North Sea while the elongated northern flank of the stadium runs up to the A92 road leading through the town. The eastern side is bordered by the large grass area of Inchcape Park while the western edge is adjoined to the Pleasureland family amusement arcade. Three-quarters of a mile south of the town's railway station, Gayfield Park has been home to the club since 1880. 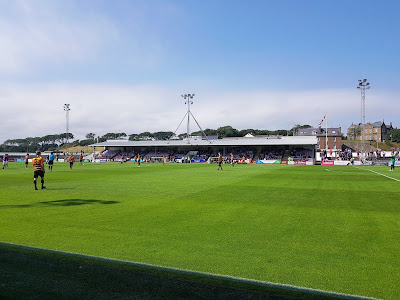 The sole all-seater stand, built in 2002, runs for the middle half of the northern side of the ground and has a capacity of 861. The stand has the players tunnel and dugouts in the middle with a snack outlet and a supporters bar & lounge facing out towards into a tarmac area used for car parking, a club shop and other demountables. The stand has four supporting beams to hold up the roof which unusually has a floodlight structure looking akin to a giant camera tripod sitting atop it. Either side of the stand is a 14 level uncovered concrete terrace which tapers off as it reaches the north-east and north-west corners of the field. 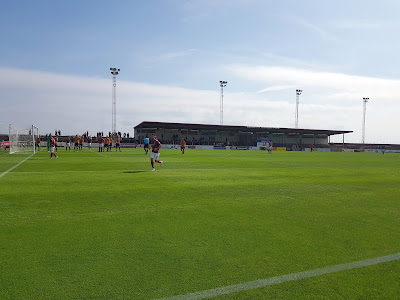 The rest of the venue consists of a 17 level concrete terrace which works like a bowl in that it extends round the corners to make a continuous structure. The middle half of all four sides of the ground are covered which makes Gayfield Park nicely symmetrical in this regard. The southern side has a TV gantry in the middle while there are a dozen supporting beams as well as a couple of floodlights coming through the roof down to the terracing. This side also has fencing which can be erected to segregate home and away fans on the occasions this is required. The eastern and western ends are near identical which covered areas behind the goals and a flat concrete section at the back of the terracing. There is an intimidating brick wall topped with barbed wire which runs around the southern and eastern sides of Gayfield Park. I have read this wall can come under siege from the North Sea during bad weather but fortunately a pleasant sunny day was in place during my visit. 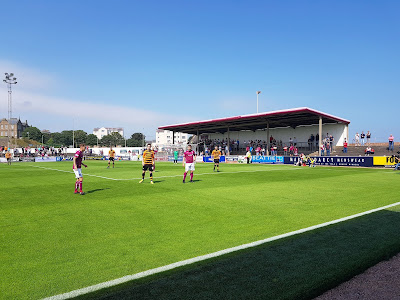 The tie was a League Cup group stage encounter between Championship sides Arbroath and Alloa Athletic. Group C had already been won by Hibernian but with the four best runners-up progressing a win would see Arbroath through to the knockout stage. Anything less would mean elimination along with the visitors who were all but eliminated prior to kick-off. The away side were better initially forcing a series of corners in the opening minutes. Alloa conceded a free-kick in the 17th minute when Andy Graham brought down Greig Spence inside the D on the edge of the penalty box. Bobby Linn sidefooted his free-kick low into the bottom corner just out of the grasp of Alloa keeper Chris Henry. Arbroath's lead proved to be extremely short lived with Alloa equalising just 16 seconds after the restart. The ball was lofted forward from Kevin Cawley to Alan Trouten who beat the offside trap down the right. Trouten crossed into the box where Liam Buchanan was there to steer the ball towards goal. Home defender Ricky Little desperately slid to try and keep the ball out but it went over the line and the referee signalled the goal. The hosts went very close to reestablishing their lead in the 23rd minute when Bobby Linn's cross from the left was unnecessarily headed towards his own goal by Liam Dick requiring a dramatic reflex save by Chris Henry to keep the score level. There weren't too many items of note for the rest of the half - Arbroath did edge the second quarter of the game with a handful of half-chances falling their way. It took just five minutes of the second half for the next goal to arrive - Alloa defender Jon Robertson played an excellent ball down the line setting Liam Buchanan off down the right. Buchanan squared for Kevin O'Hara who scuffed his shot straight into the path of Alan Trouten who needed no second invitation to slot home. Arbroath huffed and puffed for the next portion of the encounter and eventually got a slice of luck in the 74th minute when Jason Thomson's attempted cross from the right flew over everyone including Chis Henry ending up the top corner. However, just like the first half Arbroath conceded shortly after scoring. Alloa's third came about in the 78th minute when a break down the right overloaded the home defence. Robert Thomson squared the ball from the right and there were several Alloa players queuing up in acres of space in the area with Alan Trouten steering home to grab his second of the game. Arbroath's best chance in the dying minutes fell to Michael McKenna who picked up Ricky Little's long ball before half-volleying wildly over the bar from six yards out. With that chance gone Alloa held onto their lead with the final whistle confirming elimination from this year's competition for both sides. 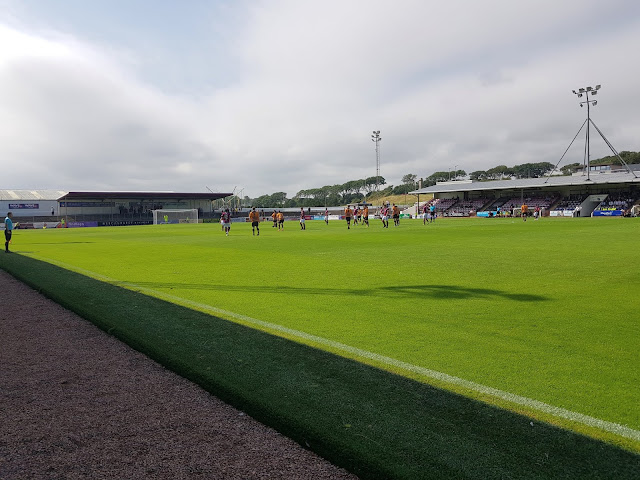