My thirty-ninth new ground of 2019 was on Tuesday 16th July at the Memorial Ground in Little Oakley, Essex. The match was Little Oakley vs. Brightlingsea Regent in a friendly.

The Memorial Ground is located on the south-west tip of Dovercourt just to the east of the village of Little Oakley that gives the club its name. The complex is bordered by housing on the northern, eastern and southern sides with the western side taken up with mini grass pitches and fields beyond. The site is just under 3 miles from Dovercourt railway station to the east and Harwich International railway station & Harwich International Port to the north. The venue has been home to the club since they formed in 1947. 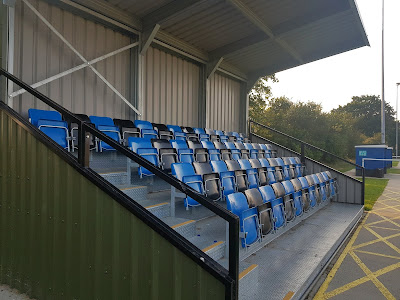 The northern section of the Memorial Ground has a club building by the car park and entrance. This building houses dressing rooms and a bar while the outside area has picnic benches and a playground. However this is not a place to watch the action due to a cage pitch separating it from the field of play. A pathway on the eastern flank takes you out to the main ground emerging in the north-east corner. Due the cage pitch the northern end has the least space and is mainly uncovered standing though there is a small covered metal terrace towards the north-east corner. 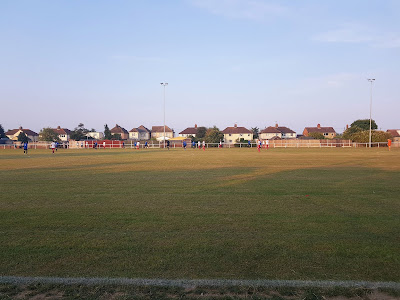 The western flank has two dugouts in the middle and an all-seater stand towards the southern end which has 50 seats spread across 4 rows. The rest of this side is hard standing with grass behind. The remainder of the ground is uncovered grass standing with no other structures. The eastern side is fairly contained on space due to it backing onto the gardens of adjacent houses but the southern end has a vast flat grass area behind the goal which can also double as a site for another mini-pitch. 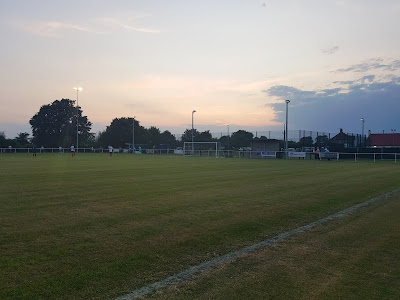 This friendly was a match-up between Eastern Counties League Division One South side Little Oakley and Isthmian League Premier Division side Brightlingsea Regent. With the visitors three leagues above the hosts it was no surprise to see them well on top in the early going. Within the first five minutes a 25 yard half-volley had stung the hands of the home keeper before the resulting corner was cleared off the line by Little Oakley. The respite was brief though as Brightlingsea opened the scoring in the 8th minute - good work on the left side of the area saw the ball passed into the box where it was drilled low past the goalie from close range. The second goal came in the 14th minute after a ball in from the right was met by a fluffed attempted clearance by a home defender allowing the grateful Regent attacker to tuck the ball into the net. There were not even 20 minutes on the clock when the third went in - this time an attacker picked the ball up on the edge of the box and unleashed a powerful shot into the bottom corner. The visitors continued to harry Little Oakley - just after the half-hour point a 25-yard shot required a decent save from the keeper. Less than a minute later it was 4-0 after a well-worked short corner found a Brightlingsea striker in plenty of space and he drilled a shot from the edge of the area into the bottom corner. This goal irked Little Oakley in particular as it was very poor defending on their part. The rest of the half passed without action as a dominant Brightlingsea took their foot off the gas with the contest already won. The home side barely made it out of their own half in the first 45 minutes but to their credit started the second period in a much improved fashion. After edging the opening quarter of an hour of the second half the away side edged the rest of proceedings and had a few good opportunities for fringe players to get on the scoresheet. In the 62nd minute a substitute did well to dance through a series of tackles on the left side of the area but after creating space well managed to drag the shot wide. The same player was denied by the keeper with 15 minutes left to go after attempting to finish off a quick attack but only shooting straight at the Little Oakley shotstopper. It just wasn't his night as he had the final chance of note in the 89th minute when a deflected shot from the left came back off the outside of the post. An easy win for Brightlingsea then who used the second half as a training session but Little Oakley would have been content to have prevented further goals going in after a very difficult first 35 minutes. 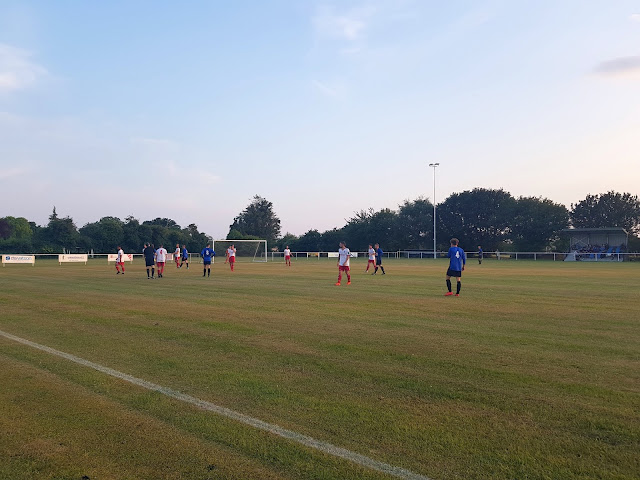