My twenty-fourth new ground of 2018 was on Saturday 29th September at Tingbjerg Idrætspark in Brønshøj, Copenhagen, Denmark. The match was Brønshøj vs. Skovshoved in the Danish 2. Division.

Tingbjerg Idrætspark is part of a sports complex nestled in a triangle of land with roads to the south and east and a housing estate to the west. The sports complex has an artificial pitch to the west of the ground with numerous additional pitches and mini pitches to the east and north with Copenhagen Cricket Club beyond this. The ground is around 1.5 miles north-east of Husum railway station which is part of the C-Line and H-Line on the Copenhagen S-Train network. Tingbjerg Idrætspark has been home to the club since 1977 when they moved from their Rådvadsvej home where they had played for the previous 40 years. 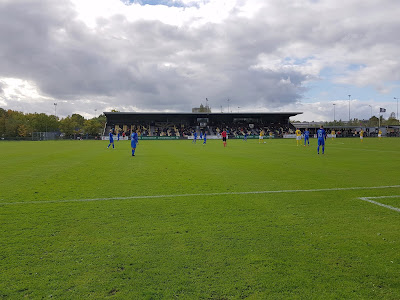 The west side of the ground is dominated by an all-seater stand which was opened in June 2003. This stand has 491 seats in the main spectator area with two equal seating sections split by a gap in the middle allowing a walkway to the interior of the stand. This middle area also has an announcer box above the walkway. The southern half is taken up by the more vocal fans who also engage in a lot of flag waving. At the back of this half there is a standing area along the back row of the stand. The northern half has a boardroom at the back and an additional row of seating in between this and the main seating deck. This pushes the seating capacity over the 500 mark and with the additional standing area and the back of the southern half gives the stand an overall limit of 600 spectators. To the north of the stand is a large open-air bar with numerous standing tables which plenty of fans were using to enjoy the game while drinking a beer. This area also houses a control room and a club shop before you reach the ground entrance in the north-west corner. 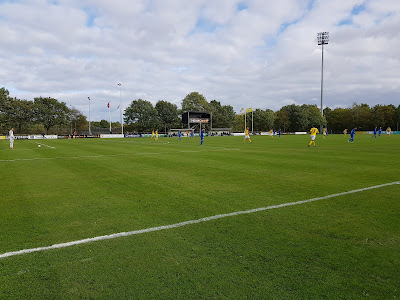 The eastern side of the ground is uncovered concrete standing though there is a raised platform for the middle half of this side. By the halfway line there is a camera gantry which the club use to upload match highlights during the game. At ground level the two dugouts are either side of this. The northern end is a fair way back from the goal and is entirely uncovered with a flat concrete area behind the pitch and grass behind this. This end sees the players enter the field via an adjacent building outside the ground perimeter. In the north-east corner there is an additional food and drink shack. In recent years the southern end had a five level wooden terrace behind the goal but this has since been removed leaving this end as the sparsest section of Tingbjerg Idrætspark. There is no hard standing facilities with just grass underfoot to view the game from. 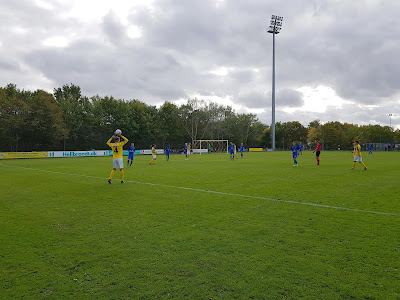 Brønshøj went into the game as favourites with the visitors struggling near the bottom of the league having picked up just four points from their first nine games. The early going was very quiet with the only chance of note coming in the 7th minute when a header from a home free-kick was was saved by the away keeper. The game really kicked into life at the midway point of the half when the first goal arrived. Brønshøj's Anton Holse sent his cross from the left-wing to the back post and found Oscar Buch who half-volleyed past the keeper to put his side 1-0 up. A couple of minutes later Skovshoved almost gifted Brønshøj a second when Tobias Brogaard rolled his goal kick straight to Andreas Baes. However Brogaard redemed himself well to save Baes' shot from just inside the area. 60 seconds later and the away side had what turned out to be their best opportunity of the game. Brønshøj appeared to be napping as a long ball found Simon Bræmer in acres of space in on goal. Home keeper Kasper Vilfort rushed out to meet him and this put Bræmer off sufficiently that his lobbed finish failed to find the net. This miss proved crucial as in the following minute the home side doubled their lead. Kevin Bechmann Timm tried to lift the ball into the box and when the ball was headed back to him by a defender he hit a terrific half-volley from 25 yards into the corner of the net. Brønshøj added a third four minutes before the interval when Jamil Fearrington's cross from the right wing found Bechmann Timm who nodded in from the six-yard line. The contest was put to bed four minutes after the interval as Skovshoved failed to clear a corner properly with the ball falling to Oscar Buch who slammed the ball into the net to grab his second of the game. The next goal arrived in the 62nd minute and again it was a Jamil Fearrington cross from the right which Bechmann Timm got on the end of. It was another cracking finish from Bechmann Timm who hit a first time shot in off the far post from the 18-yard line to secure his hattrick. Not to be outdone Oscar Buch then also completed his hattrick in the 65th minute. Bechmann Timm turned provider this time as he threaded a ball through to Buch who did well to keep the ball in play. The Skovshoved defence thought the ball was heading out so had frozen allowing the quick-thinking Buch to quickly spin, duck inside a challenge and shot past Brogaard in the visiting goal. With the lead extended to six the home manager decided to make some changes including substituting the two hattrick heroes. With the hosts easing off this  allowed the away side to play a little but they never looked like scoring with the game running to its conclusion with no meaningful further action. It was a great day for Brønshøj as they secured their biggest win for eleven years with the afternoon also being the first time in half a century that two players had scored hattricks in the same match. 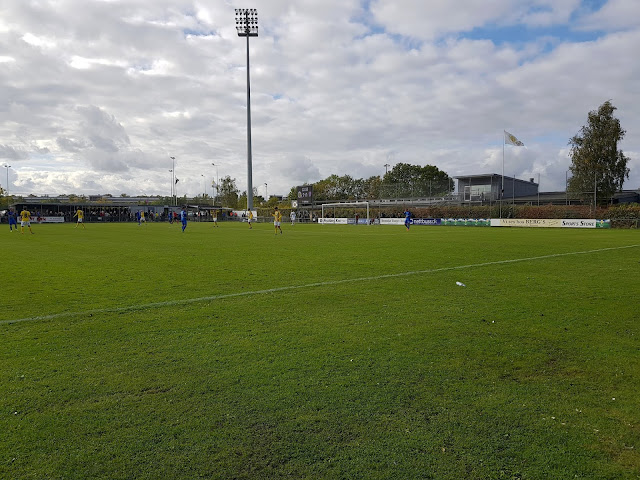