My forty-sixth new ground of 2019 was on Wednesday 4th September at the Ladywell Arena in Lewisham, London. The match was Lewisham Borough vs. Forest Hill Park in the Southern Counties East League Division One.

Ladywell Arena is part of the Ladywell Fields park area in the Lewisham area of south-east London. The northern side of the ground has Ravensbourne River with green space beyond while the western side has the  Charing Cross to Hayes rail line separating the arena with further green space. The eastern and southern sides meanwhile are bordered by housing. The venue, which was opened in 1997, is well served by rail connections with Ladywell station half a mile to the north and Catford and Catford Bridge stations half a mile to the south. 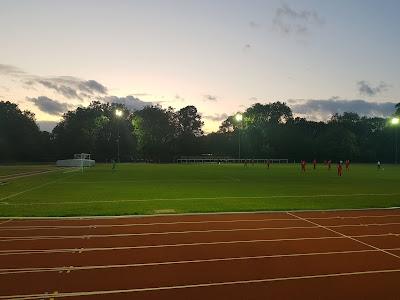 The Ladywell Arena is an athletics venue with a six-lane running track meaning fans are a way back from the field of play. The west has an all-seater metal stand just to the south of the halfway line. This stand has around 100 seats spread across three rows. To the north of the stand is a small hard standing section with a barrier to indicate where this ends and the grass area, which is not designated for spectators, then begins. To the south of the stand is a long jump with sand pit. 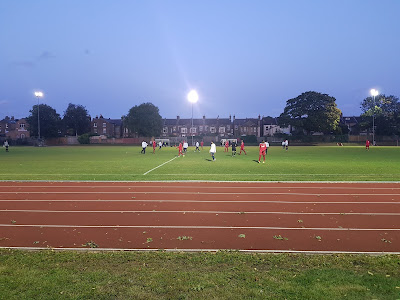 The southern end has the entrance with a large patio leading out from the main leisure building which includes the leisure facilities, dressing rooms and a food outlet. The south and west are the only identifiable spectator areas - the east side does has a slim grass verge behind the running track as well as the two dugouts while the northern end has a large shotput net which would impede views even if anyone did want to watch from this end. 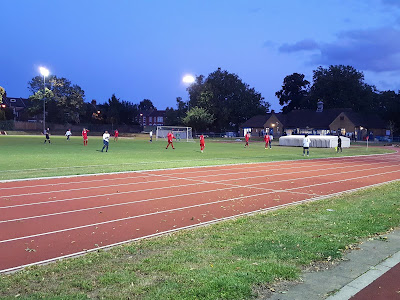 This Southern Counties East League Division One league game was a local derby with both sides calling the Ladywell Arena home. Lewisham had experienced a better start to the season with Forest Hill Park second bottom of the table but having only played a couple of games it was still early days. Forest Hill had an early opportunity in the 6th minute when a nice ball was threaded in behind the defence but a striker bobbled his shot wide while one-on-one. In the 12th minute Lewisham had their chance when a cross into the area was met by Ijah Currie-Wilson who headed the ball down with it bouncing wide almost in slow motion with the goalie nowhere near it. The opening goal came in the 21st minute when Currie-Wilson was unnecessarily felled on the far side of the area. Mohamed Basir dispatched an excellent penalty into the bottom corner of the net. The rest of the half passed by with little action of interest though a couple of minutes before the break Currie-Wilson managed a good run down the left before cutting inside and shooting low at the away keeper. Barely a minute after the restart Currie-Wilson grabbed a deserved goal from a pot shot from 25 yards which took a big deflection en route to the bottom corner of the net. Three minutes later Currie-Wilson had another chance when a lovely through ball found him on the left of the area. He cut inside and decided to cut inside again instead of rounding it off with a dink over the keeper. This gave the defence time to get back and defuse the attack. Lewisham were well on top during the third quarter of the game and it wasn't until the final fifteen minutes until Forest Hill got a foot-hold in proceedings with a few wayward long range efforts. A third goal arrived in the 85th minute when the ball was clipped into the area and Tyrelle Thomas finished past the keeper from six yards. One minute before the end of the ninety Lewisham added a fourth when Josh Owen took an optimistic punt from nearly 30 yards. The ball took a wicked bounce as the keeper went down to save with the bacll flying well over him into the corner of the net. In the 91st minute a nice move by the home side was finished when a chipped cross to the back post was volleyed just wide. A five goal difference would have been a little hard on Forest Hill Park and the away side did manage to get a consolation three minutes into injury time after a bit of a scramble resulted in the ball falling to a striker who with his back to goal turned and shot low into the net. 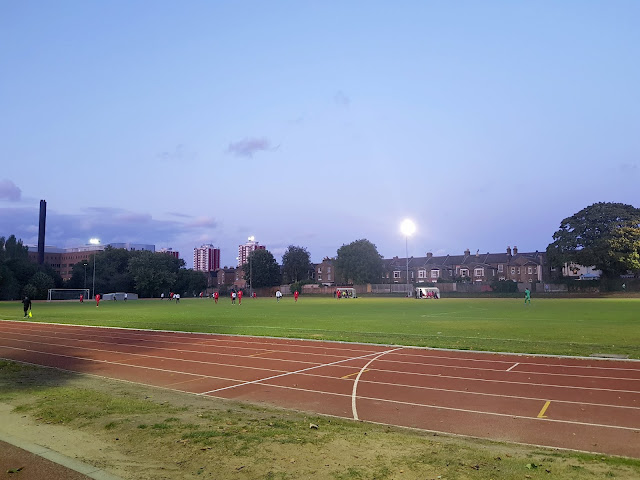