My twenty-third new ground of 2019 was on Tuesday 16th April at Cappielow Park in Greenock, Inverclyde, Scotland. The match was Greenock Morton vs. Inverness Caledonian Thistle in the Scottish Championship.

Cappielow Park lies close to the banks of the Clyde estuary with only a road separating the northern side of the ground from the James Watt Dock Marina. There is an industrial estate to the west and a car park to the east while the southern side is on the boundary with the Invercylde rail line which links Glasgow with the passenger ferry port at Wemyss Bay in the Firth of Clyde. Cartsdyke railway station is about 500 yards west of the ground so the nearest public transport link. The venue is one of the oldest in the country having been home to the club since 1879. 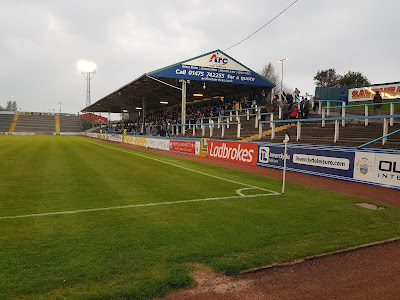 The Grandstand runs the length of the southern side of the ground and can be considered the main stand at the ground. It is an all-seater stand with the seating level raised above ground level to make space for the two dugouts, the players tunnel leading back to the dressing rooms, and club offices in demountable-like structures all along the bottom of The Grandstand. The seating deck has eight supporting beams holding up the roof so there are no entirely clear views from the stand. Six of these beams serve a double purpose in holding up three sets of floodlights which are attached to the top of the roof of the stand giving it an unusual appearance. 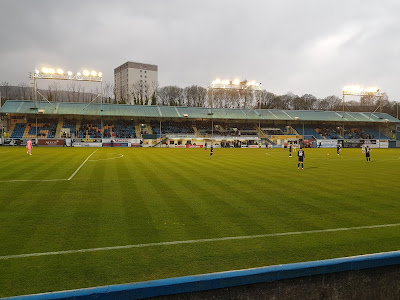 The northern side of the ground, known as The Cowshed, is a large concrete terrace which is covered for around three-quarters of its length. The remaining quarter towards the eastern end is uncovered due to the terrace tapering off as it approaches a clipped corner. The middle half of the stand has four rows of seating at the front of it - this is split into two sections with a walkway in between. With the terrace built into a grass bank it is flattened up at the very top to allow for a level for a food outlet and toilets. The Sinclair Street Terrace occupies the space behind the eastern goal. This uncovered concrete terrace is the smallest stand at the ground. The ticket office is contained on the exterior of this stand. At the opposite end of the field is the Wee Dublin End - originally a large concrete terrace, this end had 26 rows of benching installed in 1978. This end is uncovered and tends only to be required for large away followings. 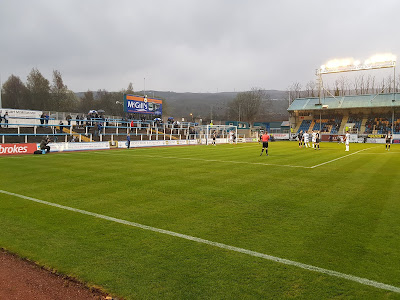 Greenock went into the game on a winless run of six games which had pulled them into a relegation scrap. Inverness meanwhile were securely in the play-offs and coming off the back of a Scottish Cup Semi-Final defeat. Greenock started promisingly and had a good chance in the 14th minute when a cross from the left by Jack Iredale found Reghan Tumilty who clipped the ball on the turn sending it just wide from around six yards out. However in the 18th minute the visitors took the lead against the run of play - Anthony McDonald picked it up down the right wing, beat two defenders to scythe into the area and then finished off with a great curling shot in off the far post. The hosts didn't let their heads go down and six minutes later Reece Lyon's rasping shot from just outside the box stung Cameron Mackay's hands in the Inverness goal. In the 27th minute a cross into the box was headed out as far as Lyon and he tried his luck from distance again - this time his 25 yard half-volley flew into the bottom corner to restore parity. In the 43rd minute Greenock got a chance to get their noses in front for the first time when Inverness defender Brad McKay held onto Gregor Buchanan at a corner and the referee pointed to the spot. Greg Kiltie was on penalty duties and he sent Mackay the wrong way to ensure Greenock led 2-1 at the break. The spirited performance from the hosts continued into the second period - just after the break Reghan Tumilty did well down the right, got the ball into the box and it was picked up by Kiltie who chipped the ball over Mackay only to have his second goal of the evening denied by a defender heading off the line. The rest of the half was fast paced albeit limited on chances but just when it looked like Greenock had done enough they were denied with only two minutes to go. The ball went from left to right to pick out Liam Polworth on the byline. He put the ball back into the centre and Darren McCauley was there to knock home from six yards out to stop Greenock from securing the victory they had deserved. 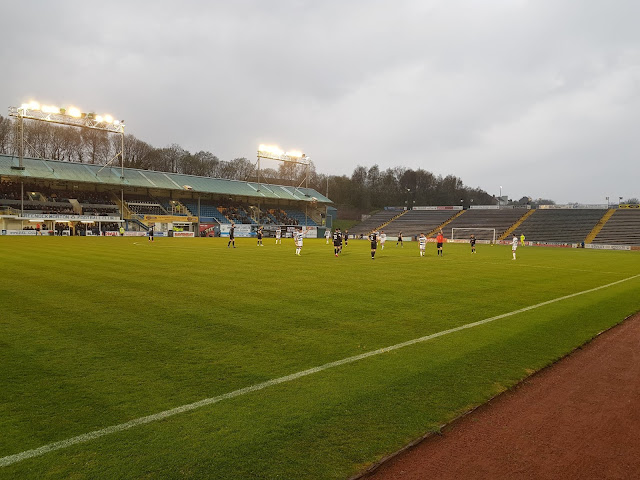