My eighth new ground of 2018 was on Saturday 31st March at Minster Park in Exminster, Devon. The match was St Martins vs. Alphington in the South West Peninsula League Division One East.

Minster Park is in a residential area in the village of Exminster. Housing borders the southern and eastern sides of the venue with a road to the north and a health and care centre to the west. The nearest railway station is Topsham which is 3 miles east on the opposite side of the River Exe. 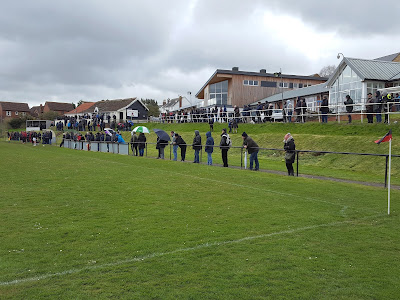 The western side is the only populated side of the ground. A road runs all the way along the gap between the pitch and the health and care centre and this slope provides a makeshift spectator area when the crowds are unusually high as they were on this occasion. Towards the southern end there is a clubhouse building with a small bar and the dressing rooms inside. Due to the incline this is well above pitch level and there is a concrete section in front of this with picnic benches where people can watch the action from. In front of this is a steep grass bank leading down to pitch level where there is uncovered standing the whole way along as well as the two dugouts by the half-way line. The only stand at the venue is located in the south-west corner - this small structure provides a covered standing area. 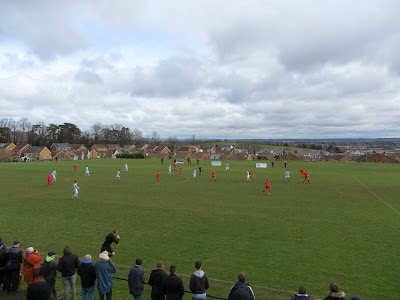 The rest of the ground is uncovered grass standing. The southern end has little space behind the goal so there is no space for spectators here though the northern and eastern section have plenty of room. The eastern side in fact has a large grass section beyond the pitch which is used as a training and practice area. With the lack of any seating or floodlights the basic nature of the venue restricts the club from progressing up the league ladder. 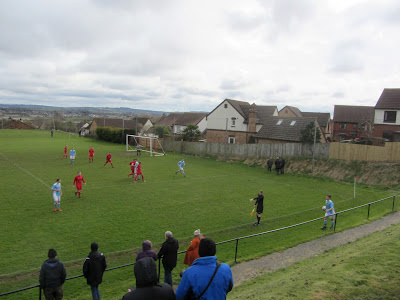 Though St Martins had not applied for promotion from the league they were still embroiled in a battle with Newton Abbot Spurs for the division title. Alphington meanwhile found themselves at the wrong end of the table attempting to escape relegation. It only took until the 5th minute for the hosts to take the lead when a ball down the line let an attacker in on goal and he calmly rolled it past the advancing keeper from just inside the box. After this though it was fairly even and the visitors could even argue they edged proceedings - their best chance was on the quarter-hour mark when a free-kick went inches wide of the post. The hosts came out much stronger in the second half and almost went 2-0 up in the first minute when a cross from the right almost snuck over the keeper, ending up just past the post. The home side were denied by the offside flag in the 55th minute when a free-kick into the area was headed into the bottom corner. A couple of minutes after this an awful ball by an Alphington defender let a home attacker in and he beat two defenders before striking the post. St Martins continued to ratchet up the pressure and it finally paid off in the 61st minute when a low ball into the 18-yard box was met by a shot which went in off the crossbar. The next goal came in the 79th minute and was the best of the match - a St Martins midfielder picked up the ball 25 yards from goal and with few options decided to smashed a long range effort at goal which went into the roof of the net. The victory was rounded off in the 91st minute when a counter attack saw a striker put through and with the keeper diving early after anticipating the shot he had time to calmly roll the ball into the bottom of the net. 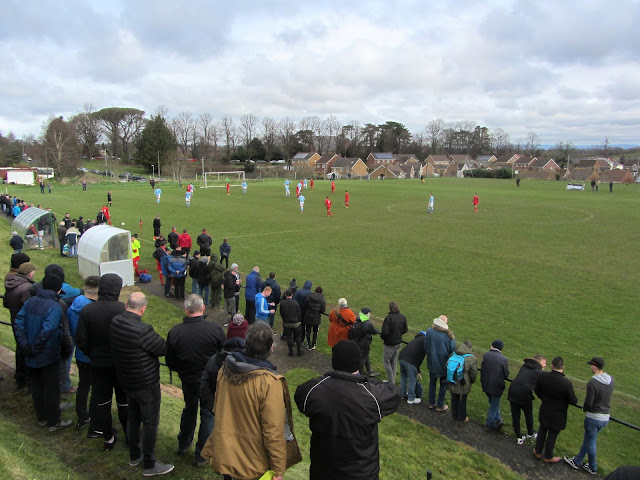