My thirty-fourth new ground of 2019 was on Thursday 9th May at Carmuirs Park in Camelon, Falkirk, Scotland. The match was Camelon Juniors vs. Bonnyrigg Rose Athletic in the East of Scotland Qualifying Cup Semi-Final.

Camuirs Park is in the west of Falkirk on the banks of the Forth & Clyde Canal which borders the southern side of the ground. With the ground based in a residential area the remaining three sides back onto housing. Half a mile south of Camelon railway station, the venue has been home to the club since the early 1920s. 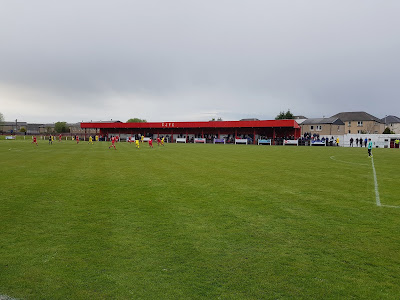 The North Enclosure is a five-level covered concrete terrace takes up most of the northern side of the field. At the back of the north-east end of the stand is a flat astroturf section with a few plastic seats placed atop it. Adjacent to this is the entrance turnstile and toilets. There is a small section of uncovered concrete terrace towards the western end. The South Enclosure is another covered concrete terrace - though it has seven rows to it the South Enclosure only takes up the middle third of this side so overall is smaller than its counterpart on the other side of Camuirs Park. In front of the stand are the two dugouts while there is a food outlet at the back. The area to the west of the stand is an uncovered terrace with a grass bank behind whole the eastern section is a mostly cordoned off uncovered terrace with a flat concrete section at the back. 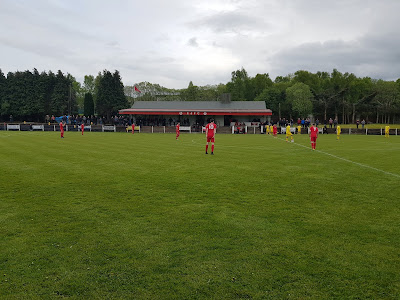 The eastern end of the stadium has a uncovered terrace but most of this is cordoned off just leaving spectators access to a flat concrete section at the top of the terrace and a flat grass section behind this. The south-east corner then has shipping containers positioned in it. The western end is the least developed with it consisting only of an uncovered grass bank. An amusing feature you can also see at this end is one of the neighbouring properties which have built a mini-stand at the end of their garden to overlook the pitch. 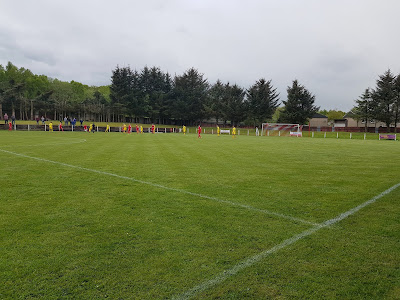 This East of Scotland Qualifying Cup Semi-Final tie didn't have to wait long for a goal when Camelon took the lead in the 3rd minute. Alan Sneddon played in Alan Docherty on the edge of the box and while everyone waited for an offside flag Docherty drilled low past the keeper from ten yards. It could have been two-nil in the 21st minute when Bonnyrigg gave the ball away to Connor McMullan in a bad area and he let in Alan Docherty who shot just over from 18 yards. The visitors had to wait until the hour-hour stage before their first meaningful chance as Neil Martyniuk stung the palms of the keeper with a fizzing 25 yard drive. Camelon were so close to extending their lead three minutes before the interval - earlier scorer Alan Docherty sprinted down the right wing, got into the area and smacked a shot off the foot of the post. Just six minutes into the second period the hosts did grab a second and this one was all about Ryan Kane. The Camelon attacker did well down the middle, staying on his feet after an attempt to scythe him down. With the referee playing the advantage he laid off to Docherty on the right, continued his run into the box and when the ball found its way back into the area Kane steered a great finish into the far corner. Any thoughts the tie had been put to bed were extinguished in the 62nd minute when Bonnyrigg pulled a goal back after Ross Gray met Dean Hoskins cross from the byline before turning a defender and shooting low to the centre of the goal. The visitors turned the screw in the final stages throwing men forward. Camelon rode their luck at times but did waste a great chance themselves with a minute to go when Kieran Anderson went clean through and with plenty of time to pick a spot went straight at the keeper. It didn't matter in the end though as Camelon saw off injury time to see themselves into the final. 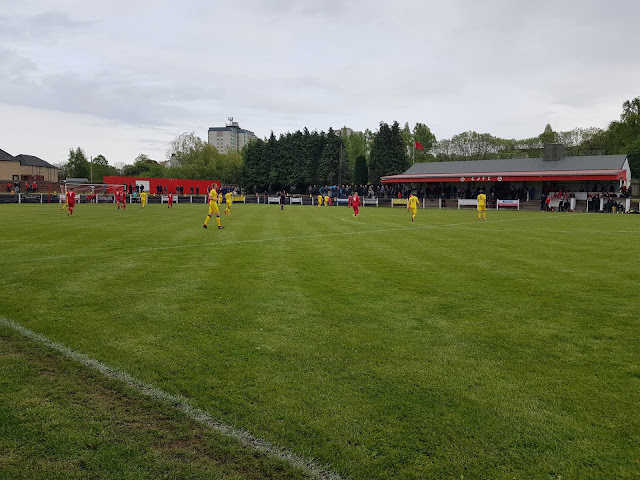