My eleventh new ground of 2018 was on Tuesday 10th April at Central Park in Cowdenbeath, Fife, Scotland. The match was Cowdenbeath vs. Montrose in Scottish League Two.

As the name would suggest the Central Park Stadium is part of a park in the centre of the town. The main green space area is to the north of the stadium site and there is more green space to the south. There is a large concrete area behind the western end which runs up to the edge of a housing estate while the eastern end has a car park in the north-east corner with the rest of this end taken up by trees separating it from a rail line. The stadium is a few hundred yards south-west of the town's railway station and has been home to the club since it opened in 1917 making this the third permanent home in Cowdenbeath's history after spells at Jubilee Park (1881-1888) and North End Park (1888-1917). 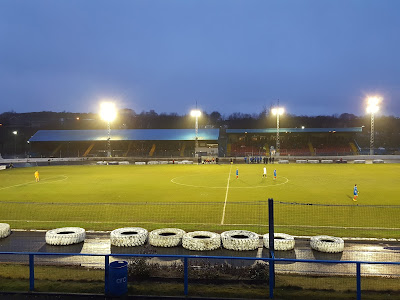 The stadium has hosted stock car racing since 1970 so the football pitch sits in the middle of an asphalt oval track. This results in the spectator areas being a way back from the action as well as meaning there is tall debris catch-fencing the entire way round the track. There are four floodlight pylons on each side of the field with none at the ends - as these are in front of the spectator areas they can cause restricted views but with current attendance levels this is not an issue. Three sides of the ground are uncovered concrete with the most spacious of these being the southern side which has a 19 row terrace with a flat section in front. At the very back of the middle area is a food outlet. The western end is similar in that is has a flat section at the front with a smaller 9 row terrace behind. The eastern end of the pitch does not have any terracing instead consisting of a flat section at the front and a large grass behind behind this. 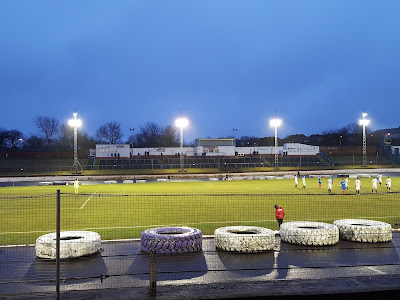 The northern side used to have a single stand running the length of the field but half of this was destroyed in a fire in 1992. As a result the current arrangement is to have two separate stands, the original stand taking up the western half of this side and a newer stand built in 1995 taking up the eastern half of this side. Combined the two stands have a seating capacity of 1,622. The older stand dates from 1921 so consists of wooden seating with lots of supporting beams to hold up the roof. There is then a small gap the newer stand which has more modern seating and offers uninterrupted views due to the cantilever roof. There are hospitality boxes along the back and with the dressing rooms contained inside the players tunnel emerges from the bottom of the middle of this stand. At the back of this stand there is a food outlet. There is a Blue Brazil club shop towards the entrance in the north-east corner. 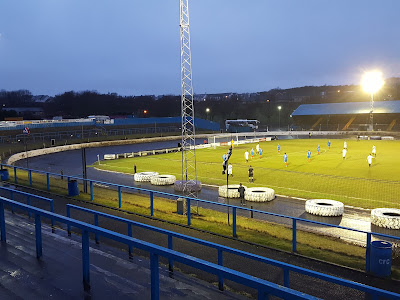 The game was between two sides encountering vastly different seasons - while Cowdenbeath were on course for a fourth consecutive bottom of the table finish Montrose were gunning for promotion only needing to avoid defeat to move to the top of the table. The opening 25 minutes were even with little quality from either side. The first action of note resulted in a goal as the visitors took a 26th minute lead. It occurred when the ball was played up to Lewis Milne who waited for it to come down before volleying into the ground with the ball then bouncing over diving home keeper David McGurn. This goal saw Montrose have the lion's share of the play until half-time though Cowdenbeath did go close just before the break when Harvey Swann's 25 yard shot skimmed the top of the bar. The visitors had the perfect start to the second half when they went 2-0 up barely a minute after the restart. A shot came in from outside the box, was spilled by McGurn and Martin Rennie tucked in the rebound from close range. The game was put to bed on the hour mark when Lewis Milne's superb curling free-kick into the corner put the away side 3-0 up. With the three points looking secure the encounter petered out with Montrose happy with their evening's work. Cowdenbeath came close to a consolation in the 86th minute when a cross from the right was met by a Robbie Buchanan shot which was cleared off the line. That would be the closest the hosts could manage to a goal as the result went the way of the form book. 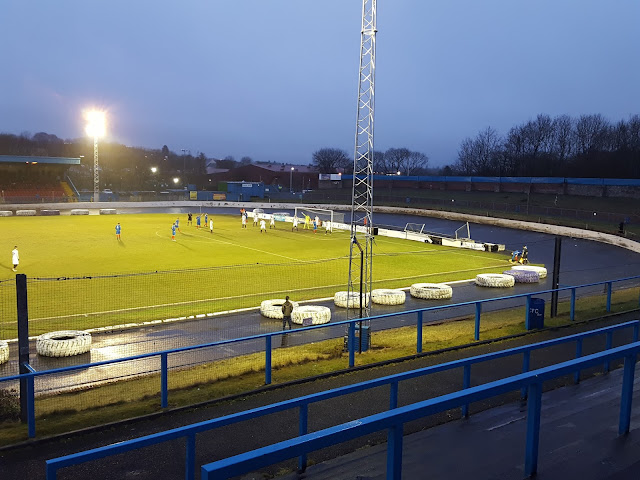