My fifth new ground of 2019 was on Wednesday 6th February at Bolitho Park in Plymouth, Devon. The match was Plymouth Parkway vs. Cadbury Heath in the Western League Premier Division.

Bolitho Park is in the Manadon area of Plymouth in the north of the city. The ground sits within an island of green space surrounded by housing on all sides. With trees marking the distinction though the ground does feel pretty contained from the nearby residential areas. The venue is just under 3 miles north of Plymouth railway station and has been home to the club since it was built in 2003. 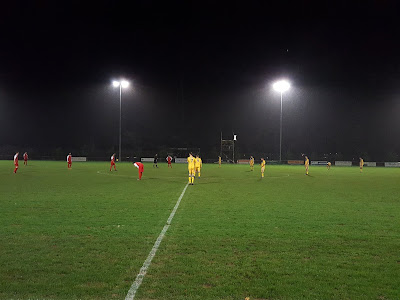 The entrance to the ground is at the northern end. On my visit this area was undergoing construction work with a new clubhouse being built by the entrance hut. Without a clubhouse at present the remaining club building in the north-west corner houses the dressing rooms, toilets for spectators and a food outlet facing towards a concrete area with cover from a gazebo. The north-east corner has a demountable with a couple of picnic benches on an area of concrete. This had a gazebo frame but no cover so was not in use during a very wet night. Directly behind the goal there is a strip of hard standing with grass behind this. 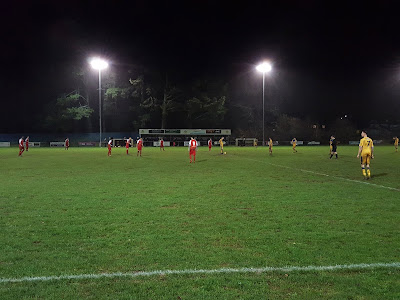 The west side has the sole all-seater in the ground - the Bolitho Stand is a 50 seat structure is just to the south of the halfway line with the other building being a gantry for filming just to the north of the halway line. The rest of this side consists of a strip of hard standing with grass behind it. On the opposite side of the field is a covered two-level concrete terrace by the halfway line. The two dugouts are either side of this and once again there is hard standing for the entire length of the field with grass behind. The southern end is the most sparse with the same format of hard standing with grass behind repeated. There is a decent amount of space on most sides to build additional stands which the club will have to do should they gain promotion to the Southern League. 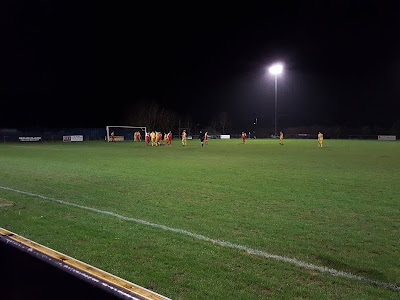 Plymouth Parkway have adapted well to the Western League after promotion from the South West Peninsula League and entered the game in 5th in the standings with aspirations of back-to-back promotions. Cadbury Heath were sat in mid-table but have suffered on the road with a 9-0 and 7-0 defeats within their last three away games. It was a very wet night in Devon and the early minutes saw very little action as the players acclimatised themselves to the conditions. The first incident of note arrived in the 21st minute when a Ryan Lane free-kick was met by the head of Jordan Annear whose close effort was straight at the Cadbury Heath keeper. A minute later Plymouth took the lead as the ball was threaded through for Shane Krac who slotted past the visiting keeper with the ball just creeping over the line as it slowed down on the saturated field. It should have been 2-0 on the half-hour mark when a mis-hit pass by the away keeper went straight to Plymouth's Mikey Williams who raced into the area, rounded the keeper but a last ditch tackle from a Cadbury defender prevented a certain goal. The hosts didn't have to wait too much longer to extend their lead though and Williams was again at the centre of thing laying the ball off for Shane Krac who drilled a shot into the bottom corner from just outside the area. A third goal arrived in the 39th minute when Mikey Williams winning a penalty after being tripped on the left side of the box. Jordan Annear went to the keeper's left, sending him the wrong way, to get himself on the scoresheet. Cadbury had offered little in the game so it was no surprise to see Plymouth extend their lead to four in the 57th minute. Jordan Annear crossed the ball from the right to Sam Hillson who produced a lovely dinked finish over the keeper from the edge of the area. The best it got for the visitors was in the 63rd minute when they had their closest effort of the evening - a deflected shot left the home keeper Kyle Moore stranded but the ball went just wide with Cadbury's luck not in on the night. Plymouth went close again the 73rd minute when a cross from Sam Hillson on the right fizzed across the area and Mike Smith hit the post with a shot from close range. Smith did manage to get a goal in the end though rounding off the scoring with five minutes to go knocking in from inside the six yard box. Another heavy away defeat to add to the list for Cadbury Heath as Plymouth continued their hopes of reaching the 8th tier for the first time in their history. 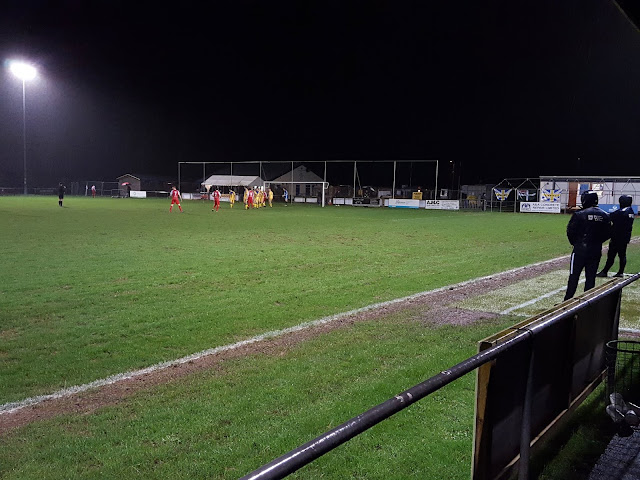