Wembley Stadium is located in Wembley Park in north-west London. Taking over from the original Wembley Stadium, building began on the new Wembley in 2003 with the stadium finally opening in 2007. It is the home of England football team as well as most national football competition finals and a variety of other sports and events. 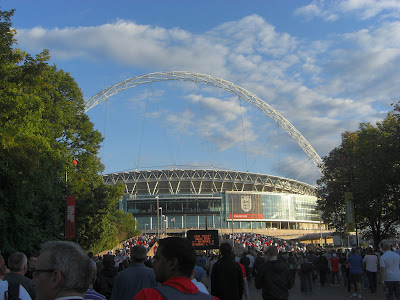 I have been to the new Wembley Stadium on only one occasion so far - to see England beat Hungary 2-1 in an friendly match held on 11th August 2010. This was the first England game since the side's extremely disappointing performance in the World Cup so it was not a full house, but with 72,024 fans inside the stadium there was still a decent atmosphere. 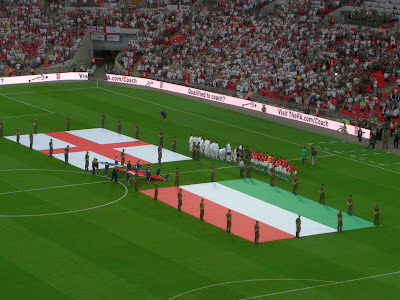 The new Wembley is structured as a three-tiered bowl with a capacity of 90,000. This is higher than the old stadium, and unlike its predecessor it has no supporting beams to obstruct the views of spectators. The roof itself is largely supported by the dramatic arch which reaches nearly 450ft into the air. As the stadium cost £800m to build, the facilities are excellent, with a quarter-mile of escalators and at 2,618, has the largest number of toilets of any stadium in the world. The ground is well ventilated and very spacious for spectators. 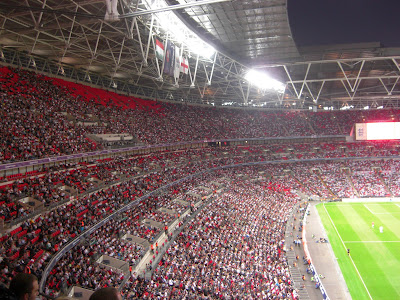 As well as hosting football, the stadium is home to the NFL International Series as well as some Rugby League and Rugby Union matches. It has also played host to motor racing in the form of the Race of Champions events in 2007 and 2008. Besides sport, concerts are the venue's other main usage and these frequently reach attendances of close to 80,000. 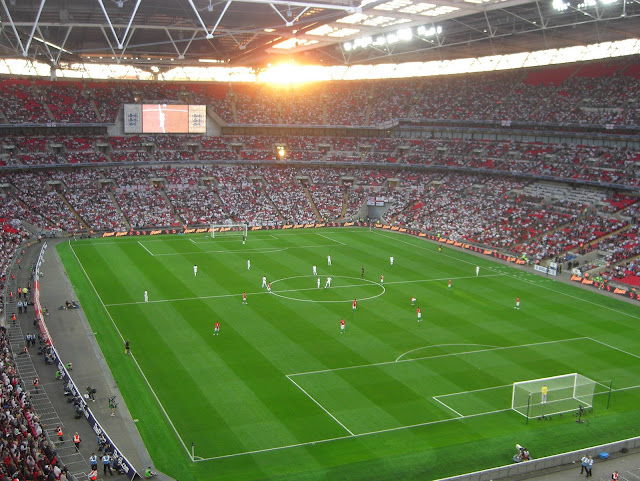 With the stadium only recently opened there will not be any substantive changes to it. It was planned for the venue to have the ability to alter the stadium for athletics events by sliding rows of seats away and installing a running track. To actually enact this however was found to be expensive and time consuming and once it had been decided to build an Olympic Stadium, such an option at Wembley became redundant. The drastic changes to the stadium to create the racing track for the Race of Champions events do however, demonstrate the Wembley Stadium's flexibility in such matters.
Posted by Jon Hayes at 16:00