My first new ground of 2020 was on Saturday 11th January at Emerald Park in Gorleston-on-Sea, Norfolk. The game was Gorleston vs. Stanway Rovers in the Eastern Counties League Premier Division.

Emerald Park is situated on the western edge of Gorleston-on-Sea. It is bordered by football pitches on the eastern and northern sides. Fields and woodland to the south and east are being taken over by a housing estate under construction which will spell the end of the venue in the coming year. The ground is four miles south of Great Yarmouth railway station and has been the home to the club since 1983 when they left their former home at the Recreation Ground. 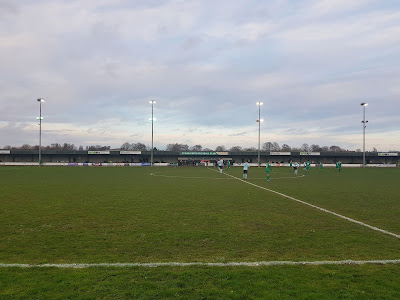 Emerald Park is a fully enclosed ground and despite only being opened in 1983 has a ramshackle feel to its southern side. This side is hard standing except for a covered section towards the eastern end and a very small stand for officials by the halfway line consisting of two leather covered benching. The boardroom is attached to the back of this while there is a separate clubhouse building behind the southern side. Towards the western end is a spacious food outlet building and the dressing room building. 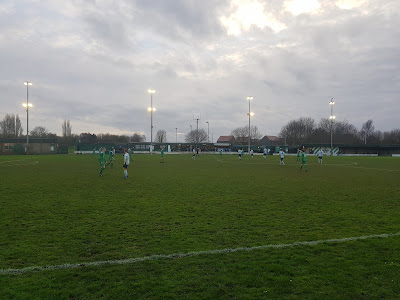 The Sailor Brown Stand has seating attached to its two-row concrete base for the whole northern length of the ground except for the dugout section in the middle. There are around 300 seats on this side with a large flat area at the back for standing viewing. The two ends are similar with three-level covered concrete terraces. The eastern end has eleven seats bolted to the floor in the south-east corner and ten seats bolted to the floor in the north-east corner while the western end has some dining chairs in place towards the northern side of the venue. 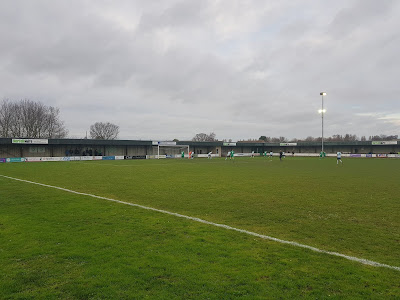 Gorleston went into the game in 18th in the table just outside the relegation zone on goal difference. Stanway by comparison were having a good season up in 4th place. The first chance of the game fell to the hosts when Jordan Stanton saw his 25 yard effort tipped over by Harry Watson. Shortly after this there was a long stoppage for a head injury which broke up the rhythm of the game and there was not another shot on target until injury time. It came by way of a tame 20-yard effort by the visitors which was easily saved by Connor Milligan. However with the stoppage the first-half injury time went on and on and in the 10th minute of it a ball out to Stanway's Tom Blackwell on the left saw him worm his way past several challenges to get into the box before shooting low past Milligan from 12 yards. Eight minutes into the second half the away side doubled their lead in similar fashion - again it was Blackwell riding a challenge on the left side of the area and then shooting into the far bottom corner with the help of a deflection. Things got worse for Gorleston in the 66th minute when a shocking ball back towards goal was picked up by Tom Blackwell who got the edge of the area and chipped over the advancing Milligan into the far corner to complete his hattrick. Three minutes later Stanway added a fourth with a spectacular 30-yard free-kick by Daniel Cunningham. As the game ticked down to the final ten minutes the home side grabbed a consolation when Elliott Hannant's free-kick hit the crossbar, bounced into a sea of bodies and Connor Ingram steered in. The scoreline was made further respectable in the 89th minute when a long ball took two deflections off Stanway players to help it on its way to Jordan Stanton on the left. He cut inside and his blocked shot rebounded to Connor Ingram who smashed home from just inside the area to make the final score 4-2. 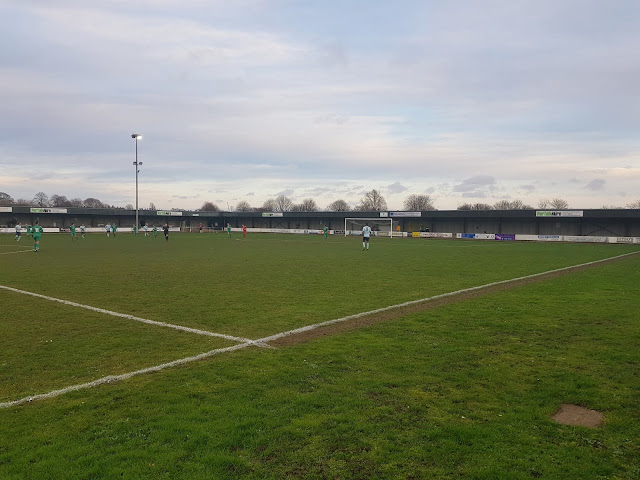