Dr Pit Welfare Park is situated in a residential area to the east of the town centre. It is bordered by housing to the north, south and east with the rest of the park to the west consisting of a playground, concrete courts and a bowling green. The nearest railway station is at Cramlingham 5 miles south. The venue has been home to the club since 1968 after a brief spell at Milnes Park. 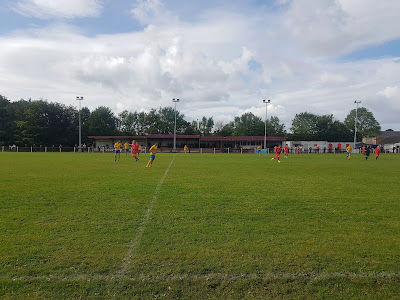 The sole stand at the venue is the Jack Carter Stand on the western side of Welfare Park. This is an old stand with seven supporting beams and is split into three distinct sections. The northern section has a media box at the back and a total of 62 seats which are a mixture of bolted on plastic seats and unattached chairs placed on the concrete terrace. The middle section is a four level concrete terrace with wooden benching along the back row while the southern section has 91 seats across four rows. Some of the seating in the northern and southern sections are broken which reduces the capacity slightly. To the north of this stand are a few demountables serving as a food outlet, a small club shop and the toilets. In front of these are some picnic benches and tables. To the south of the stand is a strip of uncovered standing with grass behind. 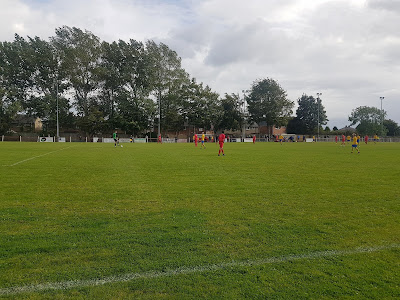 The northern end is where the entrance turnstiles are located. This leads into a large flat concrete section behind the goal and there is a very large scoreboard in the north-east corner. In the north-west corner there is a two-tier clubhouse including the dressing rooms. This end has netting to prevent balls going into the street behind. The other end of the ground is uncovered standing with a decent sized grass area behind while the eastern flank is the narrowest at the venue with hard standing the whole way along and the two dugouts also located on this side. 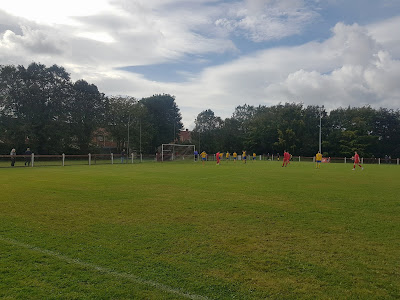 This was the opening day of the Northern League season as the two sides attempted to put last season's voided campaign behind them.
Bedlington had the best chance of the early going when Matthew Fisher's corner was headed into the side netting by Adam McGuinness in the 11th minute. Just after the half-hour mark Ryton had their first good opportunity as a ball over the top fell to Mitchell Ramsay who skied an effort way over the bar when in on goal. A few minutes later the ball found Matthew Law in plenty of space on the right side of the Bedlington area but home keeper Callum Corkhill closed him down well and blocked his shot. The visitors were on top as the half drew to a close and Corkhill was needed again as he saved well from a fierce half-volley from Louis Anderson. The second period was an improved showing by the hosts as they got on top of the game. On the hour mark Cameron Fenton picked up the ball 25 yards from goal, did a neat flick past a defender to cut inside and saw his shot saved at close range. In the 69th minute Fenton was at it again curling a shot just wide of the post from 15 yards. Two minutes later Fenton almost had an assist when he headed a cross onto Mason Stephenson who knocked in at the back post only to see his effort ruled out for offside. Three minutes later and Fenton was denied yet again as a shot from the right was well saved by Josh Graham. The Ryton shotstopper made his first error in the 83rd minute when he shoved an attacker too forcefully while trying to claim the ball from a corner causing the referee to point to the spot. However Graham redeemed himself and saved Andrew Burn's penalty effort. Just when he though he had salvaged a point for his time Bedlington finally managed to make one of their chances count when the ball found Mackenzie Sharpe who finished well to grab a late winner for the hosts. 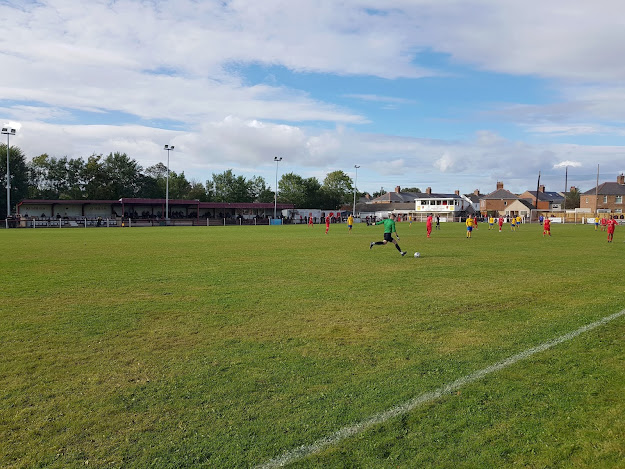