My twenty-eighth new ground of 2018 was on Wednesday 24th October at Norton Lane in Hengrove, Bristol. The match was Hengrove Athletic vs. Cadbury Heath in the Western League Premier Division.

Norton Lane is located a couple of miles south of Hengrove with the village of Whitchurch sitting in between. The ground is very much in a rural setting and it is surrounded by fields bar a garden centre bordering the north-east end and the road running adjacent to the venue to provide access. The football club is not the only sporting site in the area as further along Norton Road there is also Whitchurch Cricket Club on the eastern side of the road and rugby union side Bristol Barbarians on the western side of the road. The nearest railway station is just over the county border in Keynsham which is four miles north-west of Norton Lane. The venue has been home to the club since 1964. 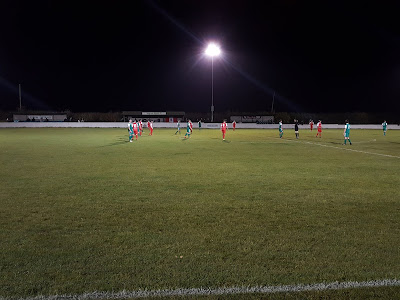 The north-west side of the ground has three separate stands - there is a 56 seat stand towards the south-west end with a covered standing section on a raised concrete platform just before the halfway line and finally another 56 seat stand the other side of the halfway line. This side is concrete for all but a section in the northern corner meaning hard standing for all the remaining areas in between the stands. The south-east side has the two dugouts by the pitch and strip of concrete behind the barrier for spectators. With one mini pitch and one full-size pitch behind this there is plenty of room to watch from this side. The section running alongside these two pitches is given over to car parking. 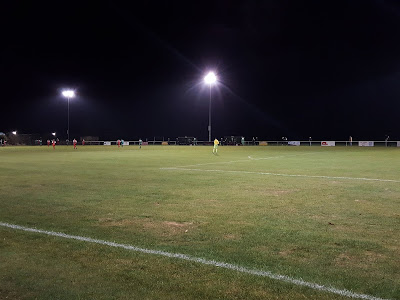 The north-east end backs onto a garden centre so is not available for supporters to watch the game from making the ground a three-sided one. There is a fence behind the goal to prevent balls going into the aforementioned garden centre. The south-west end is mostly uncovered concrete with a club building containing a fairly spacious bar and dressing rooms pointing at an angle towards the pitch. The concrete peters out in the southern corner to make way for grass and car parking. This end of the ground also has a small club shop operating out of a shed. 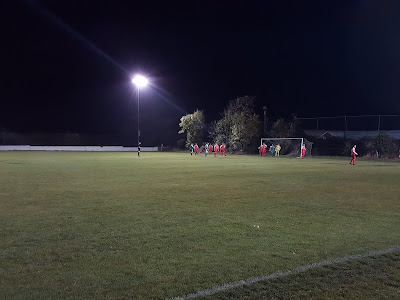 The visitors would have been confident of a result with Hengrove on a 12 game losing streak in all competitions. Indeed the hosts had picked up just a single victory on the opening day against fellow strugglers Shortwood which was the only thing keeping them off the bottom of the table. However Cadbury Heath made a bad start by gifting the home side a goal in the 10th minute. It came from an awful goal-kick by Jamie Powell straight to Jordan Chubb who raced into the box and squared for Asa White who curled the ball into the corner from 12 yards. This rocked the away side as Hengrove put them under concerted pressure in the early going. Cadbury Heath were almost celebrating in the 18th minute though as a header from a corner was aimed towards the top corner. Fortunately for Hengrove they had a defender on the line who directed the ball into the underside of the crossbar before booting the ball downfield. In the 26th minute the shock looked on as the hosts extended their lead. Craig Parsons crossed from the left wing and Mark Fear powered a header into the bottom corner. Hengrove went in two goals to the good at the break against a Cadbury Heath side who had been defensively sloppy. The visitors set about putting things right in the second half and just before the hour-mark reduced the deficit. It came from a counter attack which left George Boon in acres of space in the area giving him time to coolly slot past keeper Aaron Greatbanks. In the 72nd minute Cadbury Heath restored parity when a long ball to the far side of the area found Matt Huxley who nudged the ball in from close range. With a quarter of an hour to go Hengrove had to call upon keeper Greatbanks to prevent them going behind. The chance occurred when a corner was neatly flicked on by Sacha Tong and with the looping ball en route to the top corner a stretching save was required to prevent a goal. The hosts held out under the 93rd minute when Cadbury Heath were awarded a penalty. Matt Huxley dispatched the kick to complete the turnaround as Hengrove's losing streak was cruelly extended to 13. 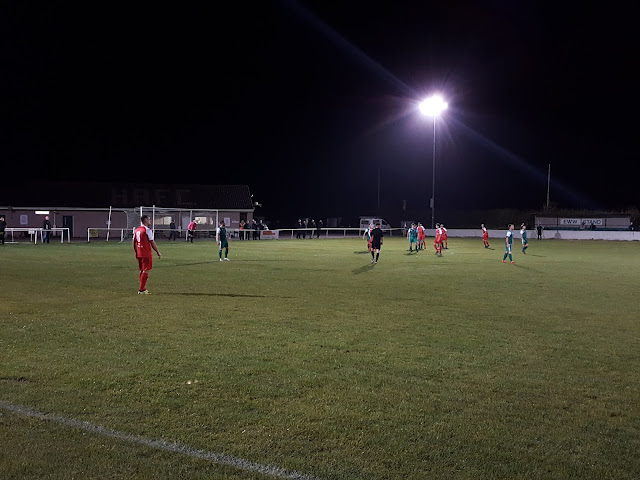