My sixteenth new ground of 2019 was on Tuesday 2nd April at Eastcliff Recreation Ground in Holland-on-Sea, Essex. The match was Holland vs. Coggeshall United in Eastern Counties League Division One South.

Eastcliff Recreation Ground is located in the west of Holland-on-Sea which merges into the larger town of Clacton-on-Sea. The football arena forms the northern part of the wider recreation ground with a playground and additional pitches to the south. These pitches are a stone's throw from the beach and the North Sea beyond. Otherwise the site is surrounded by residential areas to the north, east and west. The venue is 1.5 miles east of Clacton-on-Sea railway station, the nearest to the ground. Holland FC formed in 2006 and Eastcliff was their home until the club applied for promotion to the Eastern Counties League in 2015. With the site not meeting ground requirements they groundshared with Clacton-on-Sea for three years before moving back to an upgraded Eastcliff in 2018. 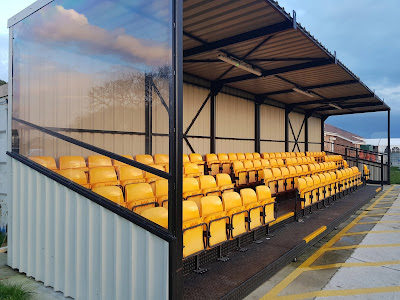 The eastern side of the ground has a 90 seat covered stand just to the south of the halfway line. Close to this is an unusual uncovered seating section with 15 spread across three rows. Behind this stand is the club building which has dressing rooms and a small, but nice, new club bar. The south-east corner, where the entrance is situated, also has a gazebo with additional seating under cover. 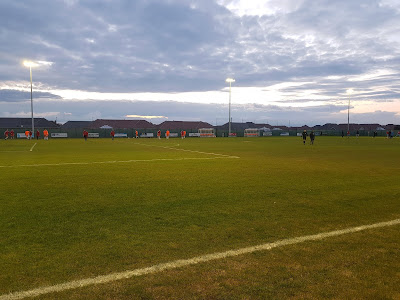 Uncovered standing is the order of the day elsewhere at Eastcliff. The western flank has the two dugouts and a thin spectator viewing area due to the metal fencing separating the football venue for the rest of the recreation ground. The northern end is also a little limited space wise though there is more room at the southern end, hence the room the gazebo in the south-east corner. 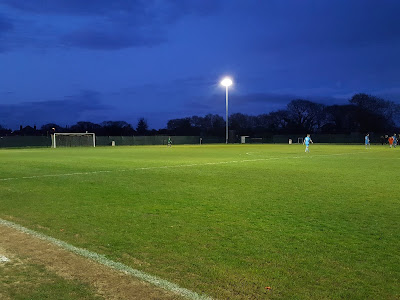 The visitors Coggeshall United sat in 5th in the table before the game but with them having as many as 5 games in hand on some of the teams above them a late promotion charge was not out of the question. Holland meanwhile were in mid-table so little to concern themselves with. The away side opened the scoring in the 13th minute. George Smith sent Holland keeper Mitchell Potter the wrong way after a spot kick had been awarded for a trip on Matt Knowles just inside the area. In the 25th minute the away side went close to a second - good play on the right hand side culminated in Andy Fennel's low shot being well saved by Potter. Coggeshall were looking comfortable and it was no surprise when they did get the ball int he net in the 31st minute. It was George Smith again who calmly stroked low into the bottom corner from 12 yards after a cross from the right hand side. A few minutes later Smith was a whisker away from securing a first-half hatrick when he headed a free-kick onto the post. Sixty second later Coggeshall struck the woodwork again when Jamie Shaw's looping header clipped the underside of the crossbar as the home side cleared their lines. It really way one-way traffic now with the visitors peppering the home goal with shots - Smith was still causing problems for Holland when he created a one-two on the edge of the box before shooting just over the bar. An excellent first period for Coggeshall was rounded off a few seconds into stopping time when Laurence Hale smashed home a rebound after Danny Scott's initial shot had been saved. Ten minutes after the interval the visitors extended their lead to four as George Smith headed in a corner to grab that hatrick he had been so close to achieving in the first half. The chances continued in much the same vein as the rest of the evening - just after the hour Laurence Hale was put clean through but the ball bobbled just before he pulled the trigger resulting in the ball going wide. The ball was in the net once more in the 72nd minute when a long ball was nodded in by Jamie Shaw only for the offside flag to be raised. Funnily a minute later Holland thought they'd grabbed a goal when Jack Fuller tucked home from six yards out but the offside was held aloft once more. The final action of the evening came in the 79th minute and it summed up the differing fortunes of the two sides on the night. A horrendous mix-up between defender and keeper meant both failed to react to a backpass and Jamie Shaw was there to nip in and knock the ball into the empty net to finish off a resounding 5-0 away win for Coggeshall United. 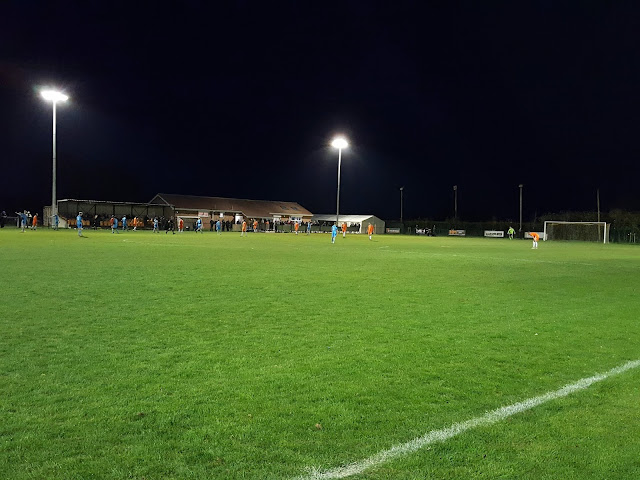