My forty-first new ground of 2019 was on Sunday 28th July at Murrayfield Stadium in Murrayfield, Edinburgh, Scotland. The match was Liverpool vs. Napoli in a friendly.

Murrayfield Stadium is located in a broadly residential area to the west of Edinburgh city centre. The stadium is surrounded by Roseburn Park to the north, a rail line to the south and a tram station, school and housing to the east. The area directly west has four rugby pitches, which are a mixture of grass and artificial turf, as well as the Murrayfield Ice Rink in the north-west corner. Murrayfield Stadium has its own stop on the Edinburgh tram network while the nearest mainline railway station is one mile east at Haymarket. The venue is the home of Scottish rugby and was built in 1925. 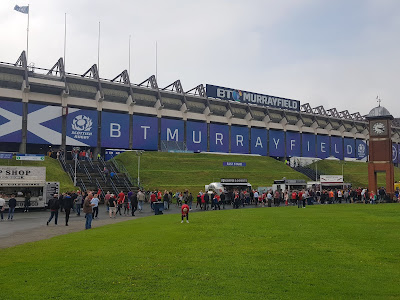 Murrayfield has a large footprint with plenty of space around the stadium for food outlets. During my visit the rugby fields to the west of the ground doubled as a fanzone while this side of the stadium also has the reception and access to hospitality suites and corporate boxes. Other facilities at the venue include a ticket office by the East Stand and a Scotland rugby store and bar in the south-west corner. 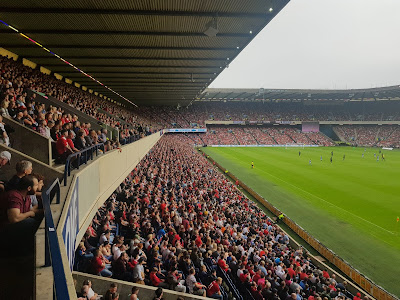 The 67,144 capacity stadium is a two-tier arena which has a slightly irregular shape due to the East Stand being smaller than the other three stands. The upper tier is a continuous bowl with a step-down for the shorter eastern side. The lower tier is more of a stop-start affair with gaps in the south-west and north-west corners for players to emerge from. There are large TV screen adjacent to these gaps which cuts down on the amount of seating next to them. In the middle of the West Stand the main seating is split by the designated area for staff and media which feature desks and other access points. Other than this the lower deck seating is consistent save a smaller eastern side due to the step down of the upper deck on account of the lower roof. There are hospitality suites and corporate boxes stretching behind the northern end, the whole of the western side and into the south-west corner. 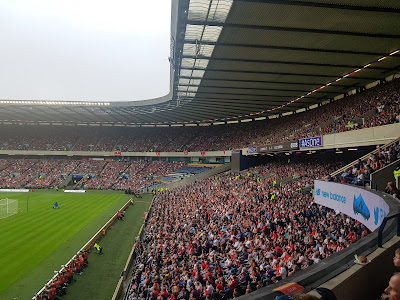 The game was Premier League side Liverpool against Serie A side Napoli in a friendly. The first opportunity of the game fell to Liverpool with three and a half minutes on the clock - Andrew Robertson got down the left, whipped in a cross and Divock Origi flicked the ball just wide of the post from six yards out. Napoli then took the lead in the 17th minute when Lorenzo Insigne went on a mazy run down the right before curling an excellent shot into the corner from 20 yards. Insigne turned provider in the 28th minute when his cross from the left was directed into the far corner by Arkadiusz Milik. Liverpool thought they had grabbed a goal back on the stroke of half-time with Georginio Wijnaldum turning in Jordan Henderson's threaded pass. The offside flag was raised tough and the score remained 2-0. It took the Italian side just over six minutes of the second half to add a third to kill the game off. Insigne was again causing the Liverpool defence problems as his curled effort, initially saved by Simon Mignolet, was turned in on the rebound by Amin Younes. Napoli continued to get in down the left wing after this with Mignolet having to produce a couple of saves to prevent an even worse scoreline. As the game reached the hour mark both sides made numerous substitutions resulting in the game petering out as pre-season friendlies often do. It was a good win for the Serie A side against a sluggish Liverpool though the English side would point at missing key players such as Salah, Firmino, Mane and Allison to evidence to show they were not competing with a full-strength side. 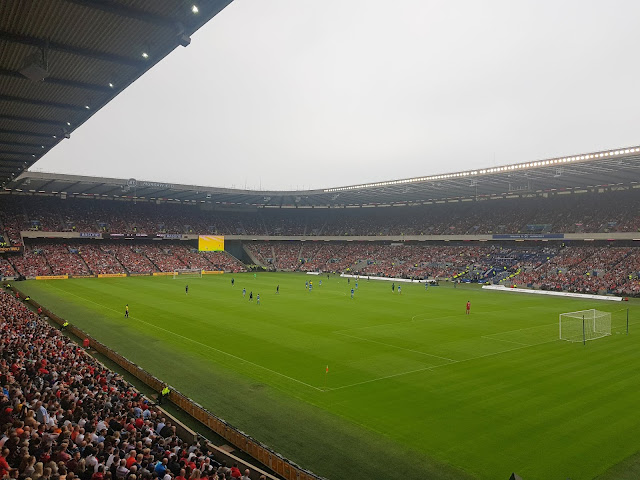