Tottenham Hotspur Stadium sits on the site of Tottenham's former White Hart Lane home in a largely residential area in north London. The closest railway station is White Hart Lane which is 500 yards due west. The nearest tube stations are Seven Sisters and Tottenham Hale on the Victoria Line both around 1.5 miles south of the venue. The venue replaced White Hart Lane which was home to Spurs between 1899 and 2017. After spending an interim 18 months at Wembley Stadium the club moved into their new home in April 2019. 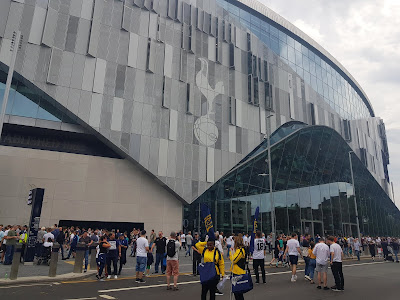 The 62,062 seat stadium is a spectacular venue which consists of an irregular bowl shape with a southern end set apart from the rest of the ground design. This South Stand is the designated 'Home End' and has a single tier for 17,500 supporters making it the largest single-tier stand in the UK. The design of the stand means it is the only one with no corporate boxes of any kind giving it a feel of being for the 'genuine' supporters. There are four levels of concourses inside and this end includes the Goal Line bar, which at 65m, is the longest bar in Europe. The North Stand has three tiers with hospitality boxes at the back of the first and second tiers. The interior has four levels of concourses and away supporters are located in the north-east corner. The East and West Stands are of similar design to each other with both having four tiers including a lower tier split into two sections and a very slim third tier of just three rows of seating. The flanks of the stadium are where the majority of the expensive seating is with around 8,000 premium seats and 70 private boxes at the back of all four tiers. There are two concourse levels for the standard fan seats while the corporate guests enjoy two sky lounges and a Sky Bar hanging from the roof in the north-west corner which is reached via a walkway out over the pitch. The West Stand has a media section in the middle of the upper tier and the player and coaches area at ground level. 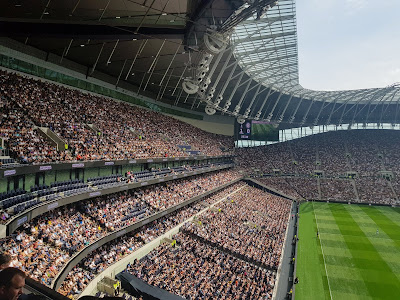 The state-of-the-art venue has many other features of note including the largest club shop in Europe at the foot of the West Stand. There is an additional smaller club shop in the north-west corner on one side of the access steps with a cafe on the other side. This is adjacent to Lilywhite House which houses the club offices and technical college. The structure is connected to the ground via a twisting walkway leading up to the roof of the North Stand. The East Stand has a banquet hall inside while the South Stand has a Sky Walk where guests can walk onto the venue's roof and even abseil down from the grass pane which supports the golden cockerel above this end. There are a total of 65 food and drink outlets dotted throughout the venue but where it really comes into its own is the dual purpose of the stadium between football and American football. With the stadium hosting the NFL there are two turfs - a hybrid grass turf for football which retracts under the South Stand to reveal a synthetic NFL turf underneath. As part of the ground, which had an element of NFL funding, there are separate facilities for the sport with additional locker rooms, medical facilities, hydrotherapy pools, warm-up areas, lounges and creches. Longer term should the NFL opt to place a franchise in London the stadium is in line to become the home of such a team. 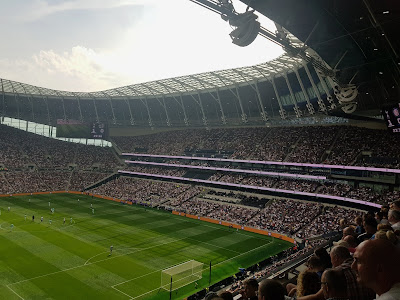 The game was part of the International Champions Cup - a pre-season tournament involving 12 teams held across Europe, America and Asia. This match-up between Premier League side Tottenham Hotspur and Serie A side Inter Milan was a dead-rubber with Benfica having already won the tournament. The tie had an exciting start as Spurs took the lead with barely two minutes on the clock - a quick counter-attack saw Erik Lamela pick up the ball inside his own half and advance towards goal. With Inter backpedalling he laid the ball off to Lucas Moura on the right and Moura smashed the ball into the back of the net from 12 yards. The visitors looked well off the pace in the opening 25 minutes but in the 27th minute burst into life when Marcelo Brozovic's excellent 25-yard curling effort came back off the inside of the post. This started off a better period for the Italian side and they equalised in the 36th minute after some lax Spurs defending. Dalbert picked the ball up on the right and passed forward to Sebastiano Esposito who, having spotted the run of Stefano Sensi, played an deft ball through to his teammate splitting the home defence. Sensi had all the time in the world to run in on goal and slot low past Hugo Lloris. The second half was a dull one - standard fare for pre-season friendlies. A total of 20 substitutions were made by the two sides which inevitably killed the competitiveness of the tie. One exception was the introduction of Son Heung-Min who went close in the 78th minute after a 70-yard run culminated in his drive being well saved by Samir Handanovic. With the scores level at 90 minutes the format of the competition necessitated a penalty shoot-out with the winner of this receiving an extra point in the standings. Both sides missed their first penalties with Handanovic saving from Christian Eriksen and Paulo Gazzaniga saving from George Puscas. The next six penalties were scored but Tottenham's youngster Oliver Skipp saw his spot-kick saved meaning João Mário only had to score to give his side the bonus point. He calmly slotted into the corner of the net to secure a 4-3 penalty shoot-out win. 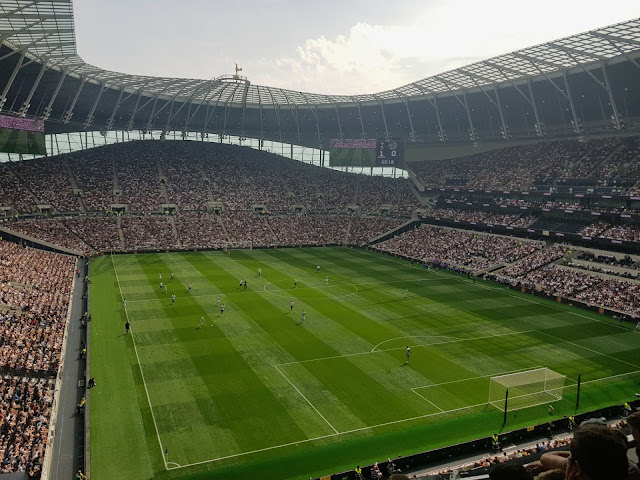