My twenty-third new ground of 2018 was on Saturday 22nd September at Boundary Park in Oldham, Greater Manchester. The match was Oldham Athletic vs. Colchester United in Football League Two.

Boundary Park lies on the north-west edge of Oldham with its name referring to its location on the boundary between Oldham, Chadderton and Royton. The ground is bordered by a road following by housing to the south and new housing estates have also recently been built to the north and west. Also to the west are the Clayton Playing Fields with numerous additional football pitches. The area to the east of the ground is the sparsest area with just an office building, car park spaces and general grassland. In terms of transport Boundary Park is 2 miles east of the nearest railway station at Mill Hills but only a mile north of the nearest Manchester Metrolink tram station at Westwood. The venue has been home to the club since 1899 though Boundary Park was in fact opened three years earlier for former club Oldham County who folded shortly afterwards. 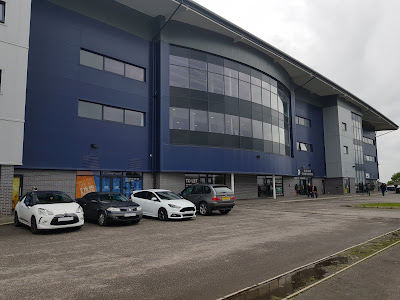 The Main Stand runs for around two-thirds of the length of the southern side of the ground and is the oldest looking in the venue. It is a two-tier structure which was originally split between seating on the upper deck and terracing on the lower deck but with the ground converted to an all-seater during the 1994-1995 season this distinction ceased. The upper tier is predominantly wooden seating with plastic seats in the middle section of the stand. This middle area also includes a separate area for officials and as well as a perspex area at the back of the stand presumably for announcers and media. The stand has a couple of supporting pillars in front of the spectator areas and these rise out of the back of the lower tier. As alluded to the lower tier was once concrete terracing which ran the length of the field but seating has been bolted on for the area in front of the stand. The old uncovered terracing either side of the stand was not converted so is disused. This stand also includes the dressing rooms with players and officials emerging from the back of the lower tier. The two dugouts are also located in this position. 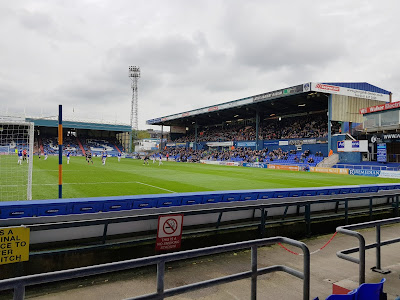 The northern side of the ground used to be a pretty similar affair to the southern side with the Broadway Stand featuring an all-seated upper deck with a lower deck originally consisting of concrete terracing before later having seating attached to it. This structure looked similarly dated and was demolished in 2008. The new North Stand opened in late 2015 and in keeping with other stands new opened over the last few years has hospitality at its heart. The single-tier of seating can accommodate around 2,300 spectators but accounts for less than half the height of the stand with two floors of hospitality areas including 11 private boxes, the Broadway Suite and the 1895 Suite. These two suites increase the stand's potential attendance by another 600 or so bringing its overall capacity to just under 3,000. The stand also houses the arena's reception, club shop, bar and a gym. The Rochdale Road Stand is behind the eastern goal and is a single-tier stand with no supporting beams to disrupt views. The stand used to be assigned to away fans and there is still fencing in place separating the southern third from the rest of the stand so the club were able to just open up a small section of it for clubs with a small travelling contingent. The north-east corner is now used by the more vocal home fans who previously occupied the Chadderton Road End at the western end of the field. This stand, which has a capacity of 3,750, is now entirely assigned to opposition supporters. The seating is split into two areas with a walkway between the upper and lower segments. There are four supporting beams at the front of the stand which prevent a perfect view of the action but with such a large number of seats for away fans only the most substantial followings will result in people ending up with properly restricted views. 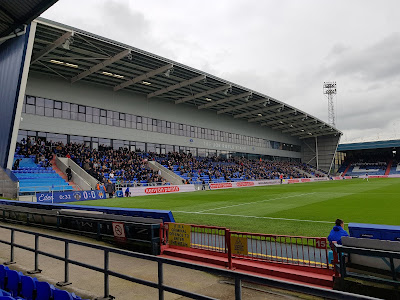 Both sides had started the season well and were in amongst the play-offs at kick-off. Colchester drew first blood after a quarter of an hour - it came when Brennan Dickinson's corner was nodded to the back post by Luke Prosser for Luke Norris to volley home from a couple of yards out. For the majority of the half the U's were happy to cede the lion's share of possession to Oldham but the Latics found it difficult to carve open an effective Colchester defence. The closest they came were a couple of half-chances, one being a Chris O'Grady shot straight at Dillion Barnes after 19 minutes and the other a Sam Surridge shot across goal in the 25th minute which zipped past the post. The away side started the second half perfectly by netting a second goal in the 50th minute. Once again its origins were from a Brennan Dickinson corner which landed in the middle of the area. Peter Clarke's scuffed attempt to clear the ball found Harry Pell just inside the 18-yard box and his first time effort flew into the corner of the net giving Daniel Iversen no chance in the home goal. The two-goal cushion lasted just nine minutes though as a long ball down the right wing found Andy Taylor on the byline and his well placed ball across the goal found Sam Surridge rushing in to knock in from six yards out. Oldham's confidence looked up but this was undone in the 68th minute when a very long goal-kick by Dillon Barnes arrived at the edge of the opposition area. A period of head tennis ensued which culminating in Harry Pell nodding through to Luke Norris who, with a swarm of Oldham defenders around him, managed to squeeze enough room to get a shot off which was deflected into the back of the net to make it 3-1 to Colchester. With five minutes to go the home side grabbed a lifeline when a free-kick was lofted into the box and Sam Surridge headed into the bottom corner of the net. Colchester reacted by dropping very deep which only served to invite Oldham on them and inevitably the equaliser followed three minutes later. It came from a Dan Gardner corner which was headed in by Peter Clarke from inside the six-yard zone. On the balance of play the hosts deserved something out of the game but it was a galling final five minutes for Colchester as they saw a win slip away. 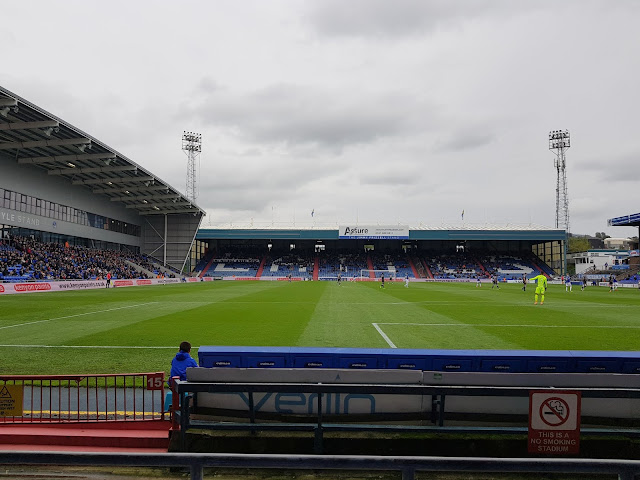