My next ground of 2011 was on Saturday 25th June at the Millennium Stadium in Cardiff, Wales. The event was the 2011 British Speedway Grand Prix.

Though this was obviously not a football game I thought I'd still do a report on it as this was my first visit to the Millennium Stadium. My dad drove us to Chepstow just over the border where we stayed the night and then caught the train into Cardiff city centre in the morning. The stadium towers over the railway station and is only a couple of minutes walk from it. 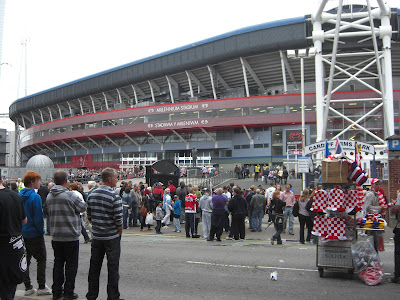 We spent much of the day in the city centre before heading back to the stadium for the start of the Grand Prix. An unusual aspect of The Millennium Stadium is that it was built adjoining the former National Stadium, now known as Cardiff Arms Park, with the South Stand of Cardiff Arms Park directly attached to the North Stand of the Millennium Stadium. The effect of this has been to limit capacity in the North Stand. Stadium chiefs are hoping to rectify this issue in the next few years as the eventual demolition of Cardiff Arms Park is looking increasingly likely. 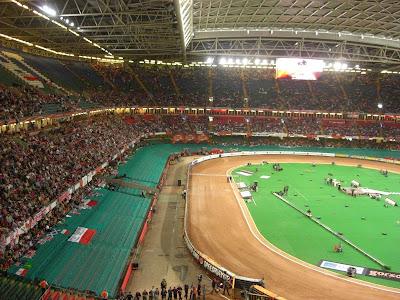 The Millennium Stadium has three tiers (except for centre of the North Stand which has only has two tiers due to its attachment to Cardiff Arms Park) of varying capacities - the upper tier seats 33,000, the middle tier seats 18,000 with the lower tier seating 23,500. However, due to safety concerns for the Speedway Grand Prix and other events the front of the lower tier is cordoned off, reducing its capacity to 11,500. We watched from the upper tier of the North Stand and had a very good view of the track and the rest of the stadium. 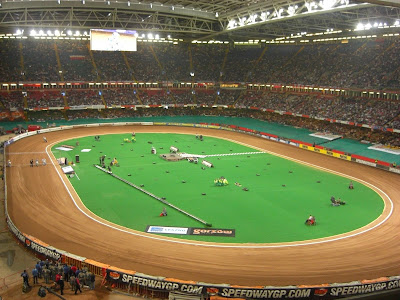 The Speedway Grand Prix was won by American rider Greg Hancock with Nicki Pedersen in 2nd and Chris Holder in 3rd. The stadium's famous roof was closed due to the day's inclement weather and this generated a great atmosphere inside the venue. The event culminated in an indoor fireworks display which was very loud as you might expect. 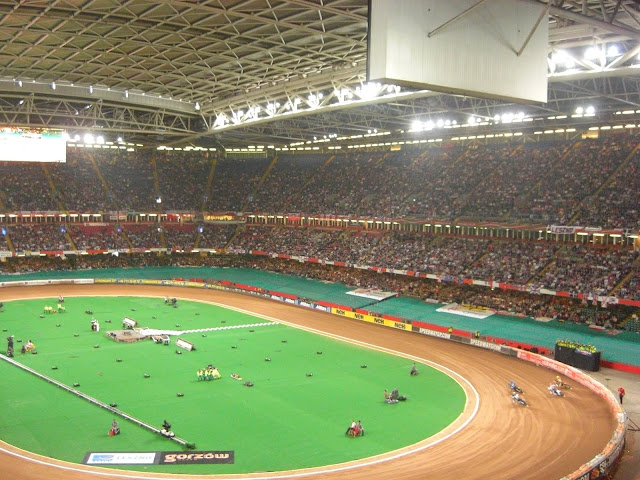